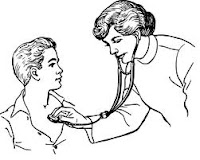 This morning, someone said to me, “I’ll bet you’re exhausted, aren’t you?”  The words that automatically came from my mouth surprised even me!  I said, “Actually, I don’t have time to be exhausted!”
My son was taken to the hospital four days ago in an ambulance, and it’s been quite harrowing at times ever since. To start with, he had a heart valve replacement about two and a half years ago – so any time something goes wrong with him, we get concerned that it involves that valve. But it usually doesn’t. This time, he was hemorrhaging from the stomach quite profusely!  When I called the ambulance, he was so weak he couldn’t sit or stand.
In the ER, a lot of tests were done, blood and plasma started and he was finally admitted.
Once in a room of his own, there were a million questions asked, more testing, blood and plasma continued and no food. On the evening of the second day, his fever went so high, they packed him in ice. It was very frightening! Then it was determined that his body was rejecting the blood and it had to be stopped. But doctors don’t study for so many years to no avail. They knew just what to do. He was given drugs that helped his body accept the blood and it was started again. But his hemoglobin did not go up... so they knew there was still a problem.
He was taken for an Endoscopy where it was discovered that an artery had ruptured and was bleeding badly. Because of its size, they feared cauterizing would not take care of it, so they used a metal clip to hold it together. A surgeon was alerted to be on call in case the clip didn’t work and the next step would be to go in and close the opening surgically. This was scary, too!
At long last, just this morning, the surgeon talked to my son and told him that it appeared surgery would not be necessary. To top that, the Endoscopy was repeated to be certain everything was alright... and it was. There was no more bleeding. We are thankful! Hopefully, he will get some real food today, his Coumadin will be started back, and he will be able to go home soon.
I have spent long hours sitting by his bed and walking hospital corridors praying. Even when I’d go home for a few hours sleep, it was hard to completely relax and sleep soundly. There was always one ear on the phone.  Only another mother would understand this.
Just as another mother would understand that – until it is completely over and I feel confident there will be no more surprises... I don’t have the time to be exhausted! Maybe later.

I understand it peggy. My son wsa in the hospital for 6 weeks and I only got a few hours sleep. it's hard to be a motehr with a sick child.