Cabin In The Woods - Part 2 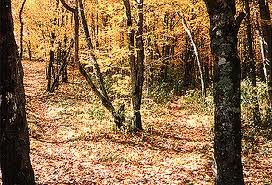 A while back, I wrote about an enjoyable weekend my husband and I shared with other family members at a cabin in the North Carolina mountains. Must be the time of year that causes me to keep thinking about that trip...

On the day we were to go home, the weather was perfect. Nobody wanted to get in their car and drive away. So after we got all our stuff packed up, we decided to prolong the inevitable by going for a short hike in the woods. Tramping around in the mountains takes me back to my roots and I loved it!

As we walked, someone commented how nice it would be to spend an old fashioned Christmas at a place like this. Noticing little "Charlie Brown" trees growing here and there, I said, “Wouldn’t it be fun to take one of those to the cabin and let the kids decorate it with strings of popcorn and other old fashioned things?” They would enjoy it, although they probably wouldn't understand the concept. Today’s kids are used to perfectly shaped Christmas trees thematically decorated with expensive color coordinated ornaments. But we agreed it would be good for them to get a taste of what Christmas was like in their grandparents’ time.

Feeling much younger than my age, I bounced along with the youngsters, having no trouble keeping up, until I hit a patch of wet leaves hiding underneath some dry crackly ones. I slipped and went down hard on my derrière and left elbow. The pain was horrific and for a few seconds, I thought I was really hurt. I at once had visions of hospitals, doctors and therapy, since that scene was still fresh in my mind from my mother’s not too long ago fall and broken hip.

My daughter, who gets very excited when someone’s hurt, started yelling hysterically for her husband, who was up ahead leading the pack. He came running back and, although I felt like I couldn't move, I forced myself to move around while laughing at the same time, hoping to allay their fears that Mama was down for the count. My daughter said, "What hurts?" I told her the only place I could feel real pain was in my elbow. But after bending it back and forth a few times, we decided it wasn't broken and they helped me to my feet. I wanted to go on with the hike, but they wouldn't hear of it and insisted on going back to the cabin. Of course, this didn't bother the kids any because they were tired and thirsty and whining a little anyway. We had gone at least a mile, maybe more.

By the time we got back to the cabin, my elbow was blue and had a big swollen area the size of an egg. My Mother Hen daughter started making like a nursemaid, wanting to put ice on it, etc., but I assured her that I could make it home with a swollen elbow and it would be okay. So... we did last minute things and locked up the cabin. Outside, we took group pictures to treasure for the rest of our years, gave hugs, said our good-bye's... and left... waving from car to car as far as we could, until, at the forks of the road, our two cars turned in opposite directions. It was a little depressing, as it always is, to say good-bye to loved ones after spending quality time together.

Even with the swollen elbow that turned from blue to purple to green to yellow over the next week or so, this last beautiful day topped off an already wonderful weekend!

I like this. You make it seem so real. I feel like I'm right there with you and your family.