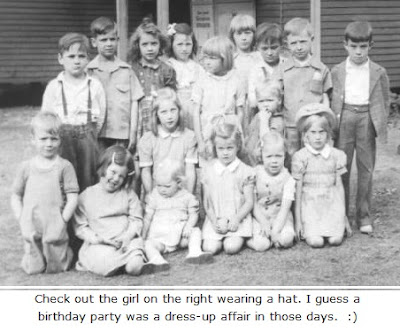 Mr. H. and I were discussing our early days this evening while eating dinner. The subject came up about how far back we could actually remember something concrete. I said, “I remember when I was five because I started school that year.” Mr. H. said, “I remember age five, too. Not many details; just that I started school and remember my first grade teacher’s name.”
That conversation didn’t last long, but my mind wandered on...
More memorable than starting school was the special birthday party I had when I was five years old. Seventeen kids attended.
It was a nice day and the party was outside. Actually, after a few games, we got a little too warm and my Aunt Betty urged me to go in the house with her to get a drink of water.
While we were inside, she wandered into my mother’s bedroom and decided to splash on some of her cologne. Turning to me, she said, “Here, let’s put some of this on you, too.” There was just one drawback, which we realized too late. It wasn’t cologne.
It was fingernail polish remover!
Bad scene! We were wearing beautiful new dresses that were bought for the occasion. They were made of taffeta. Hers was blue and mine was peach. We often got dresses alike. I guess our mothers thought it was cute since we were so close to the same age and size.
When Betty saw that her dress was wet, she started wiping downward on it with both hands. I did the same. Oh my! The dresses started coming apart  - dissolving might be a better word. Betty began crying. I followed suit. So there we stood, our beautiful new dresses in shreds, both bawling like babies when my mother came in.
“For the love of Heaven! What have you two done?” she shrieked.
“We thought it was perfume,” Betty said, wiping at her tears.
“Are you mad?” I said, a question that was always uppermost in my mind. It was never a good thing for my mother to be angry!
Without answering, she said, “Get out of those stinky dresses; you’ve ruined them! I’ll find you something else to put on so you can go back to the party.”
After that, the party wasn’t much fun. We played a few more games, had birthday cake and ice cream and I opened presents. But the luster was gone. And soon, my friends were, too.
Before they left, my mother took a picture of me with my party guests. But one thing was missing – the beautiful peach and blue dresses Betty and I had worn to the party.
Some memories live forever – no matter how young you were when you made them.
www.amazon.com/author/peggytoneyhorton