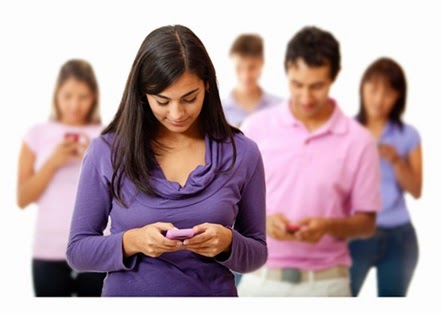 For a long time now, Mr. H. and I have wondered: what is all the hullaballoo about cell phones? Everywhere you go – to the mall, grocery store, or just taking a walk in your neighborhood, you pass people – youngsters and adults alike - with their heads down, looking at a little device in their hands called a “smart phone.” Some will look up long enough to smile or say, “Hi” but others never look up –  don't even see you. One wonders why they don’t run into trees or telephone poles, or walk in front of moving vehicles.
“What are they doing?” you ask.
Texting!
It seems that literally everyone is so caught up in texting that they can’t go anywhere without their texting device. If you suggest to a family member or friend that she might leave her smart phone behind while the two of you go shopping, you’re told in no uncertain terms, “I couldn’t do that! “Someone may try to reach me.”
When did everyone become so important?
I remember a day when you could be gone from home from daylight till dusk and never receive a phone call. Texting wasn’t even a reality then. If there were any important events that you needed to hear about, you heard about them when you returned. And the world went right on turning. Most everything could wait until you got home.
Although there was that one time that my youngest daughter called the Sears store she knew I’d be shopping in, and had me paged to tell me she was in the ER because she had cut her hand badly while washing a glass! When my name was called on the PA system, followed by the message, “Call your daughter immediately,” I must admit, I panicked! However, by the time I got to the ER, she’d been taken care of, which proved that she could have handled it without giving her mother heart failure!
Nobody even knew what a smart phone was then!
~~~
Now that I’ve had my rant, it’s confession time. Five days ago, I became the proud(?) owner of a Smart Phone!
It wasn’t something I needed – or even wanted, for that matter, but for the past year, my grown children have been complaining because their mother was “out of the loop!” In order to communicate with me, they had to pick up a phone, push a button and wait for me to answer – and give up at least twenty minutes of their precious time to talk. Sometimes they could get away with e-mailing, but even that took time away from other things they’d rather be doing.
What an inconvenience!
I’m not dissing my children. Really, I’m not! They’re kind, generous, caring children – and I love them dearly! I understand that times have changed drastically in the past ten to twenty years.
But everyone is so busy these days. I’d give half my life if I could pick up a phone and talk to my mother for twenty minutes. Or five!
Ah, well, as the saying goes, “If you can’t beat ‘em, join ‘em!” So that’s what I’m trying to do. I say “trying” because this texting thing is not as easy as it looks! I type every day on the computer with no trouble at all, but have you ever really looked at the size of one of those keyboards on the new phones? They’re tiny! My fingers just don’t fit. Most of my words come out looking like “mstz[p or xtorn’t” The first time I tried to show off my texting ability to my daughter, I wrote, “Loo” (Lol) and “This iw fim” (This is fun).
Trying to sign off with my son, I typed, “Lat” the first time, “Latre” the second time and, while I was working on the third try, he helped me out by writing, “Later.”
“Yeah, tha’st it!” I wrote.
So, as you can see, it’s hard to teach an old dog new tricks, but they all tell me to keep practicing. “You’ll get it,” they say.
And I text back, “I hopr yor rigjt!”
www.amazon.com/author/peggytoneyhorton
Posted by Peggy~ at 11:18 PM

This is great Peggy! I know exactly what your talking about. I have trouble texting to. But your children are right. Just keep practicing. You will get it sooner or later. Good luck.

So Cute! I think you must be a fun person to be around Peggy. You seem to enjoy life. Good post!

Too funny! You're so cute. Love your stories!

This is great Peggy, for someone who was never afraid to tackle a new thing, I find myself weary of trying to text, maybe its an age thing. I see others my age doing it and think now if they can I can to, then the nerves take over.
So I am putting that on hold for a while longer. Good luck to you and the new adventure.

I am with u pehhy (peggy$

Don't worry, some day your grandchildren will drive your kids nuts with the request that they adapt to some new technical gadget. Your revenge will be delicious.

Yes, history does seem to repeat, doesn't it? Thanks for reminding me.

Love it! This reminds me of the time you trid to get me to learn to email.