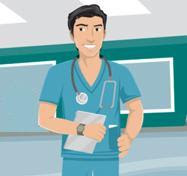 Lest anyone thinks I’m reporting only on ditzy blonde female nurses, I'd like to make it clear that today; my scary story is about a male nurse.

He arrived on the scene early this morning and introduced himself to my son as, Joe, his nurse for the day. He proceeded to make conversation about being a Vietnam veteran who wondered why he became a nurse considering the horrendous things he saw in the war. Why indeed?

After doing the necessary things for the patient, he decided it was time to take down the antibiotic drip and start a new one, even though the old one wasn’t finished. My son, seeing dollar signs, said, “It drips very slowly. It probably has another hour to go.” But Joe insisted, “No, I’d better change it!”

So, he pulled the old one off the hook, grabbed a new bag nearby and somehow, while getting it ready to hang, he ripped it. Didn’t bother Joe. He merely pulled off some clear tape, mended the tear and hung the bag anyway. When it starting dripping, he unrolled a big wad of paper towels and laid them on the floor underneath the bag to catch the drip. Problem solved!

But not for long. In a very short time, the loud dinger started going off to alert the staff that the bag was empty again! It was replaced - by someone else -thank goodness, leaving my son with the thought that he would pay for two wasted bags of antibiotics due to Joe’s carelessness.

Does anyone wonder why insurance rates are so high?

Poor old Joe. He needs to work somewhere besides in a hospital, doesn't he? I wonder how sterile that antibiotic was after he ripped the bag. Glad your son got through it, Peggy. My advice would be to go to a different hospital next time.
I enjoy your blog. Keep up the good work!

That really is scary.