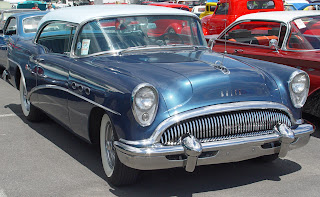 They say confession is good for the soul.

Perhaps I’ll soon find out because I seem to be on a roll. A few days ago, I confessed to accepting a ride with strangers when I was fourteen – and tonight, I feel the need to confess another youth-inspired deed. Should I or shouldn’t I?

A lot of years have gone by. Who is going to tell whom? And at my age, who cares anyway? Except for my conscience, there is no one to punish me.  No repercussions.

I was sixteen and Carol would be in a few months. I had my driver’s license; she had a learner’s permit. One summer day, after much cajoling from Carol, her mother permitted her to drive the family car a few miles down the road, with me beside her. I felt honored that her mother trusted me... but was a little nervous, too. This was a big responsibility!

There was one condition. She was absolutely not to drive across the Kanawha City Bridge, which, in those days, was only two lanes – and they didn’t look that wide, especially to a new driver.

“Oh, no, Mother; I wouldn’t do that. I’d be afraid,” Carol innocently said. So her mother handed her the keys and off we went. Driving through our little town with the radio blaring, we felt much older than our years and were giddy with excitement. Talking and giggling, we hardly paid attention to where she was driving until we suddenly realized we were on the road that led right onto the Kanawha City Bridge!

“Oh my gosh!” I said. “Your mom said not to cross the bridge.” But by this time, she had no choice. She continued, slowing down so much that the man behind us honked his horn impatiently, but Carol kept driving.

Once we were off the bridge, she pulled off the road and stopped. She was shaking. I said, “You want me to drive?”

“Nope,” she said stubbornly. “Just give me a minute.”

Regaining her composure, she pulled out into the traffic again. It seemed everything would be okay until we started to notice the traffic was suddenly very heavy. Bumper to bumper. Looking at my watch, I said, “No wonder. It’s the 5 0’clock traffic; people are getting off from work.” We hadn’t counted on that. “It wouldn’t have happened if we’d stayed on the other side of the bridge,” I told her – a little upset. “And the worst thing is,” I said, “the only way home is back across that bridge!”

In order to get back to the bridge, she had to turn onto one of the busiest streets in Charleston. Cars were everywhere, some going too fast, some turning off, and some drivers noticeably displeased with her obvious inexperience. She was nervous and I could feel my heart pounding! I suppose our guardian angels were with us that day because, somehow, we made it back to the bridge... and across it. Once we were on the road that led to home, and the traffic was no longer heavy, we looked at each other and broke into hysterical laughter! Looking back, I suspect it was our bodies’ way of releasing stored up tension?

When we finally pulled into her driveway and went inside, Carol threw the car keys on the table and calmly said to her mother, “We need something to drink.” Her mother got two glasses out of the cabinet, started filling them with ice and said, “How did it go? Did you have any trouble?”

Nonchalantly, Carol said, “Just fine. No problems at all.”

Then Mrs. Lewis looked into my eyes and said, “How’d she do, Peggy? She didn’t cross the bridge, did she?”

I froze! Why did she have to ask me that direct question and not Carol? She was always the lucky one who got away with everything. And I was the one with the conscience. I didn’t want to lie to her mother! Yet, I couldn’t “rat” on my best friend. Time stood still. Finally, without daring to look at Carol, I managed to say, “Oh, no. Everything was fine. We had a good time.”

This is only one of the many adventures Carol and I experienced together over the years. Even after we were grown and should have known better, we’d sometimes find ourselves doing things that were a little iffy.

I think I'll stop with the confessions now!

This is funny peg. I guess we've all disobeyed our parents at one time or another. Sometimes we got caught, sometimes we didn't. That's life.

somehow I can't imagine you getting into trouble peg. you seem so perfect. sam

Cute story. Thanks for sharing it.

You are a good story teller peggy. I always enjoy your stories.