The Legend Of The Cherokee Rose 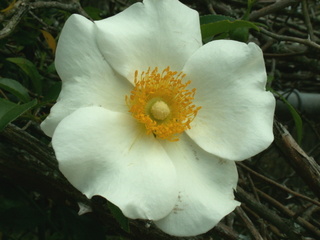 A few weeks ago, I wrote about my Native American heritage and the story of what became known as the Trail of Tears when some 100,000 American Indians were forcibly removed from the eastern United States to what was called Indian Territory, which is now the state of Oklahoma.

When the Trail of Tears started in 1838, the mothers of the Cherokee were grieving and crying so much, they were unable to help their children survive the journey. No better symbol exists of the pain and suffering of the Trail Where They Cried than the Cherokee Rose. The chiefs prayed for a sign to lift the mother's spirits and give them strength to care for their children.

From that day forward, a beautiful new flower, a rose, grew wherever a mother's tear fell to the ground. The rose is white, for the mother's tears. It has a gold center, for the gold taken from the Cherokee lands, and seven leaves on each stem that represent the seven Cherokee clans that made the journey. To this day, the Cherokee Rose prospers along the route of the "Trail of Tears". The Cherokee Rose is now the official flower of the State of Georgia.

This is so beautiful peggy. Sad to. Thank you for sharing with us. ted

Lovely story! Thanks for giving it to us peg.

Very nice peg. You always give us something to think about. Bless you!

Ah, Peggy, hardly a dozen lines of your story passed before my own tears were falling. Thanks for helping us all become a little more human.

I love this peg. No wonder so many people read your stories. They are always good and we learn from them too. Denise

Thanks, Peg for the info on the Cherokee rose. We all, knowing descendants or not, share an American Indian heritage - something that speaks to us of a more natural way of life, brutally ended.
But all roses, the Cherokee rose included, offer us solace. Here's a quote from a favorite poet:
"A profusion of pink roses bending ragged in the rain speaks to me of all gentleness and its enduring." ~ William Carlos Williams

Su, I agree. Thanks for the comment and the beautiful quote!

For an important event on a specific date, you can choose preserved flowers in advance. You can then keep it perfect condition until you sell it, with no demanding storage conditions. I recommend La Fleur De Luxe to everyone.