Like a million others who grew up in the same era, I spent Saturday afternoons at a movie theater. Often, the movie was an old western, which wasn't my favorite, but at thirteen or fourteen, if all your friends went to the movies on Saturday, so did you, no matter what was playing.
I’ll never forget the ones that had Indians in them. For no apparent reason, the savages would go on a rampage, and, riding their horses as fast as the animals would go, they’d head for a little cabin where a family was huddled inside, hoping to escape capture by the bellowing, red-skinned enemies. Both men and women hovered by windows with shotguns and fired, in vain, toward the onslaught while children snuggled together in the farthest corner of the cabin.

Anxious movie watchers would cheer when an Indian was hit with a bullet and fell off his horse, but in the end, there were just too many of them! Using their tomahawks, they’d chop their way through the walls, come through windows and down the chimney and finally, through the doors. The good guys and gals were then dragged outside where they were usually relieved of their scalps in much the same way that hunters skin a small animal. After setting the cabin on fire, the Indians rode off displaying their trophies on poles and chanting victoriously.


Looking back, I know that this was quite violent for young children to watch and I wonder how movie makers slept at night. Many children who went to the movies were too young to discern that this was fiction and only meant to entertain.
As silly as it may sound, I was bothered by these movies for many years. Until after I was grown, I’d see those very scenes in my dreams – only the good guys were me and my family. After a number of pig-tailed redskins made their way into our house, I’d awaken in a cold sweat, sometimes screaming! I’ve had others tell me they were affected in the same way.
All of those years, I thought Indians were bad. Then I found out that my great grandfather was a Cherokee Indian! That meant I had a lot of Native American blood running through my veins. Now, I was confused!
But listening as my grandmother told stories of The Trail of Tears helped me to see things in a different light. This is the story of the removal of the Cherokee Nation from its ancestral homeland in parts of North Carolina, Tennessee, Georgia, and Alabama to land set aside for American Indians in what is now the state of Oklahoma. Some 100,000 American Indians were forcibly removed from the eastern United States to what was called Indian Territory. Included were members of the Cherokee, Choctaw, Chickasaw, Creek, and Seminole tribes. The Cherokee's journey by water and land was over a thousand miles long, during which many Cherokees died. What a tragic story!
Torn between my ancestry and my nightmares, I'm still somewhat bewildered, but at least, I finally learned the difference between fact and fiction—and in this case, neither is very pretty! 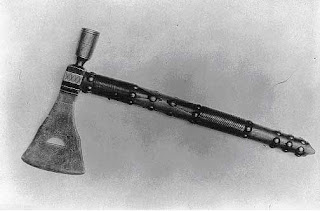 This is quite a story peggy. Some of us older folks remember those old movies but I doubt if many of us were as bothered by them as you were. Good post.

I enjoyed reading this.

I remember those old movies peg. your right they were pretty violent. can't say they ever gave me nightmares though. Ian

Thats erie to think about scalping people. I wouldn't want to watch that.I'm surpised they showed it.