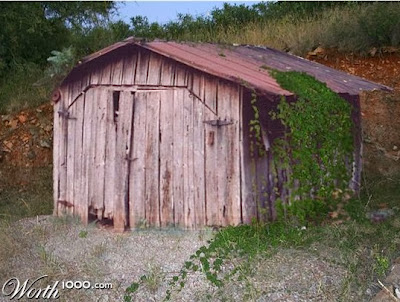 Our house was situated on the banks of the Kanawha River. It had a great yard shaded by large fruit trees. Apple, pear, plum, and peach trees delighted the senses as well as the appetite. What's more, a long arbor laden with succulent purple grapes all summer completed the orchard–like feel of the yard.
Ah, but it was very dark at night. Spooky. Not even the brightest moonlight could find its way through the abundant foliage surrounding the house. It was a small town and there were few streetlights – certainly none at the end of the street that led to the river.
As a child, I cared nothing about Halloween. Still don’t. I realize I was then, and still am, among the minority, but the day holds little fascination for me. When my friends said, “What are you gonna be for Halloween?” I crinkled my nose and answered, “I don’t know. Probably nothing.”
Yet, invariably, a few friends came to my house at near-darkness every Halloween night and begged me to go trick-or-treating with them. It didn’t do any good to refuse. They insisted until I went to my mother’s closet and found something to fashion a costume – an old dress, hat and some make-up was enough to do the trick for me and off we’d go hitting every house in the small town, saying the words, trick-or-treat what seemed like a thousand times and coming home with our bags full of goodies. I enjoyed it in spite of myself, but always vowed never to do it again! It was the same every year.
Almost.
One year stands out in my memory.
My father loved practical jokes. This particular Halloween, he came up with one that still makes me chuckle.
There was a weathered old garage standing at the edge of our property in the front. It seemed to have no purpose. I don’t know who owned it or why it was there.
My dad got the bright idea that, since the dilapidated old garage was already scary looking, especially after dark, and one could imagine all sorts of things going on inside, it might be fun to make it even scarier for the trick-or-treaters and see what happened.
And so… just before dark, he squeezed through the small opening in the garage door, which stood a little ajar at all times but didn’t seem to open fully. The way it creaked when it was moved made it a perfect Halloween prop! The cracks between the vertical boards were just far apart enough so that he could see out without being seen.
I was given the honor of sitting on the front porch swing with a bowl of candy to hand out when the little ghosts and goblins said, “Trick or Treat!”
My dad watched for the kids through the cracks and allowed them to go to the porch and collect their goodies, but when they turned to leave and reached the end of our walk, which was parallel with the side of the old garage, he’d shine a flashlight through the cracks and let out a horrible monster sound that could have awakened the dead!
Each reaction was almost the same: the child stopped, looked surprised, and then screamed a blood-curdling scream before running away as fast as possible. My dad enjoyed himself to the max.
But as more kids came, they had been warned by others and were ready for the trick. We thought the fun was over until one little guy decided he wasn’t gonna let a make-believe garage monster scare him. “I’m gonna open the door and see who this person is that’s scaring my friends!” he announced proudly.
He bravely walked up to the partly open door, stopped and was ready to peek inside when suddenly, with a deafening bellow, my father lurched right in front of the boy. But something was different.
He had no head!
Even I was startled for an instant.
The little boy’s eyes grew as big as half-dollars and, for a few seconds, he seemed paralyzed, but when he finally managed to move, he turned and ran away.
Fast!
Unbuttoning his jacket and removing it from his head, Dad smiled, winked at me and said, “Let’s go inside. The fun’s over.”
It was the best Halloween I ever had!

Sweet. I love it!

Who doesn't like Halloween? Is there a reason you don't? Maybe you were scared as a child. Anywya, nice story.

I loved that story Peggy. You r a wonderful writer !

Thank you, Cindy! I'm glad you liked it.

I could just picture the whole thing as I read it. Lol.

Cute story, though I'm thinking there may be other's sharing the story of how they were scarred for life one Halloween... ;)

You're probably right, Lisa. Never thought of that. Thanks for the comment! :)

What a great story. Sounds like you had a very fun dad.

I definitely did have a fun dad, Jayne, and lost him much too soon!
Thank you for reading my story and commenting. :)