Laugh All You Want

Has it occurred to anyone else that we are already halfway to Christmas? In fact, six months from now, it will be three days after Christmas. I wrote a post four months ago about how quickly time passes and how soon it will be holiday time again. I was joking then but now, at the halfway point, it is beginning to feel like a reality.

I can almost hear your laughter. But just think about it. Where did June go? It seems to have evaporated. July will do the same. It will be highlighted by the many elaborate Fourth of July celebrations all over the country, and once that’s over, the rest of the month will fly right on by just as June did.

Suddenly, it’ll be August, usually the hottest month, and things will begin to change. Mothers of young children will be buzzing around getting them ready to go back to school. College students will be signing up for fall classes. It will start to feel like summer is coming to a close, whether we want it to or not.

There are other changes in August, too. Can’t quite put my finger on it, but both days and nights take on a different feeling. There are bluer skies, cooler nights interspersed with the warm ones, and times when we feel as though we can actually smell fall coming—at least here in the Southeast.

By now, most of you know that fall is my favorite season and you’re saying, “That’s just wishful thinking on her part.”

You may be right. So go ahead and laugh all you want. But don’t wait too long to start making your Christmas list.

I promise – the way time flies, you’ll be shopping before you know it! 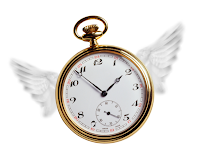 You are so right, peg. Time really does fly! i can't believe half of the year is gone already. good post.

You really have a way of making us think peggy. time does pass faster than any of us want it to. but thinking about Christmas shopping in June is more than I can bear. I'll wait a while. I like the way you write. keep it up.

Nobody but you could write this and make it sound reasonable peg. It will be here before we can turn around. I know exactly what you mean. Phyllis

Hey peg. you posted early today. maybe I won't have to stay up so late tonight to see if you post.
this is good. time does fly there's no doubt about it. one day we're young and all of a sudden, we're getting old. nothing we can do about it. just enjoy what we get. sam