How Many Lizards Would It Take? 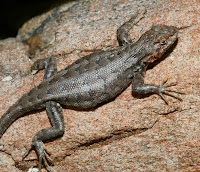 All I wanted to do was plant a few impatiens this afternoon. After all, my son gave them to me on Mother’s Day – almost a month ago – and I’m embarrassed to say, until today, I hadn't gotten around to planting them. Poor little things, still in their nursery pots, were blooming anyway – trying their best to make an impression even though they were being ignored. However, at 87° this afternoon, they were starting to look a little peaked.

Shame on me! I thought as I grabbed my watering can and shovel and started digging up the desert-like dirt in the pot I’d planted impatiens in last year. I’d be mortified if Lee came for a visit and saw his gift still in the tiny nursery pots! He'd never give me flowers again.

It didn’t take long once the dirt was wet and loosened up. I was just ready to put the first one in when I saw something move out of the corner of my eye. Turning, I saw two – not one – but two, lizards right in front of the garage door, about three feet from me. They may as well have been alligators!

Cold chills ran all over my body. But then the lizards disappeared into the garage, and I hurriedly finished the job at hand. When I went over to the spigot to get more water to “water the flowers in” (as my grandmother used to say), I almost stepped on another little reptile, but it ran under my flower bed (which I’ll never again weed with my bare hands!) How many of these things are there? I thought.

When I was finished, my plants looked happier in their new home. At least they weren’t thirsty now. I felt better, too.

I put the watering can and shovel back into the garage, mindful of where I stepped and what I touched. I then closed the garage door and went inside. Carefully placing a throw rug across the bottom of the door in case there was room enough under it for unwelcome visitors to come in, I shivered and went to wash-up so I could start dinner.

“Even if you had enough – and it would take a lot – the skin is totally different.”

“Alligator skin is thick and rough, and lizard skin is soft.”

“How do you know? Did you ever touch one?”

“Yes,” he said, starting to chuckle.

I don’t think I believe him, but I’m certainly not going to touch one to find out!

What a funny post peg. Your husband knew you were kidding didn't he?

He's right. The two skins are much different.and lizards are so small you'd never get them skinned. but this is funny peg. sam

Cute peg. I don't like lizards either. It gives me shivers just to talk about them.

our house was infested with lizards one time. everyone said 'they won't hurt you'--- well I don't care. I still don't want them living with me. it took us and a pest control service months to get them all out. hope that doesn't happen to you peggy.

Thanks a lot, Inez! That really gives me something to think about. I'd have to move. Or burn my house. I would not live with lizards!