It All Started In A One-Room Schoolhouse

On the way to meet family members for dinner this evening, my husband and I were talking about our childhoods as we’ve done many times before, but this time, he asked a question. He wanted to know why I graduated from high school younger than most people do. So I told him the whole story: 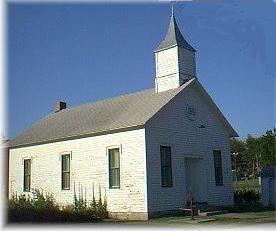 When I was only five years old, I lived in a small coal mining community with my parents. I had several friends to play with and we had a lot of fun in the summertime. My yard was the largest one in the neighborhood, so all the kids liked to play there. My daddy made a swing by tying rope to a sturdy limb of a large apple tree. My friends and I loved pushing each other on the swing. We played other games, too. At dusk, we’d play hide‘n seek and catch lightening bugs until our mothers called us to come in and get our baths. The sounds of happy children at play echoed throughout the community every day from mid-morning until dark.

But one September morning, my summer fun came to a screeching halt!  School started.  Since I was younger than all my playmates, I was left with no one to play with until after three o’clock in the afternoon. That made for a long day.  I was bored and lonely. I whined a lot and my mother didn’t have enough imagination to keep me occupied. I missed my friends!

One cool fall morning, I sat on my back porch munching on a bunch of grapes and looking longingly toward the one-room schoolhouse that sat on a large tract of land just behind our house. I felt very drawn to it. Without saying a word to my mother, I got up, ran to the corner of my yard, climbed the fence and kept running until I was at the schoolhouse. Lucky for me, the old-fashioned building had long windows. If I stood on my tiptoes and stretched really tall, I could barely see inside the classroom. Holding onto the window ledge, I peered in, watched the teacher pacing back and forth while talking to the class, then watched as she turned and wrote on the blackboard. Finally, a girl named Alice saw me. When she pointed toward me and said something, the other kids looked, too, and the whole class laughed.  I turned around and ran all the way home.

But the next morning, I waited until my mother was busy, ran out to the corner, climbed the fence, ran to the school, stood on my tiptoes, stretched really tall and looked in the schoolhouse window again.  This time, the teacher, Miss Elkins, saw me. Watching her walk toward the window scared me, but I didn’t move. She said, “Hi Peggy. Would you like to come inside?” When I shook my head up and down, she said, “Go ask your mother if it’s okay. If she says it is, come back and I’ll let you in the front door.”

Running as fast as I could run until I reached the back porch, I opened the screen door and yelled, “Mother, can I go to school?” She said, “Now, we’ve already talked about this. You know you’re not old enough to go to school.” Breathless, I said, “But Miss Elkins asked me to come.” Mother looked at me disbelieving and said, “Why would she do that?”
“She saw me looking in the window; can I go, please?” I said.

Without another word, Mother took me to the wash basin, washed my hands and face, combed my hair, and led me to the bedroom where she put a clean dress on me, clean socks and my best shoes. Then she ran her hands through her hair, removed her apron and took me by the hand. We walked through the back gate and around the path over to the schoolhouse. She knocked on the door.
When Miss Elkins opened the door, Mother told her that she was there to see if she really had invited me to sit in on her class. Miss Elkins said, “Yes. She’s welcome. If she’s going to look in the windows anyway, it would be better if we let her sit here with the other children. Perhaps she’ll get tired or bored after a few days and not want to come anymore.”

But I didn’t get tired or bored. I loved going to school! I was up early every morning, ready and out the door just as if I were as old as the other kids. There was just one little hitch. I had been very slow giving up my baby bottle. Since I was the only child my mother could ever have, she had been indulgent by letting me have it “only” when I was very tired... with chocolate milk in it.  So every day, at recess, I’d run as fast as I could to the corner of my back yard where my mother would be waiting with my bottle of chocolate milk. I’d turn that thing up, guzzle the sweet liquid until the bottle was dry, hand it to Mother and run straight back to school. If other kids laughed - and they probably did - I didn’t care. It was “my security” and nobody could take it away from me until I was ready!

I finished that year of school and was promoted to the second grade right along with my seven-year old friends.  I had barely turned six.

This is such a cute story peggy.I can just imagine you standing on your tippytoes looking in that window. You write very good stories. I enjoy all of them.

Loved this! And I was also five in the first grade: No one else was.
I can relate!

Nice story. Back then, for the vast majority, there was no kindergarten. Many children were ready and more than willing to go to school at five years. As I remember, the law didn't prohibit it, as long as the child was to reach six during the school year. Thanks goodness that the school systems, being a lot smaller, were not as strict back then.
I, too, went to school at 5 years. Not only was I the youngest, but also the shortest - not just that year but for several years, thereafter. So I had to be quick to raise my hand in class. Otherwise, I would never have been seen behind all my much taller classmates.

Being shorter has its advantages when you don't want to be seen. :)

I bet you were cute stretching to look in the window peg. you probably wished you could stay home when you were a little older--- say, the 4th grade? good story as usual. sam