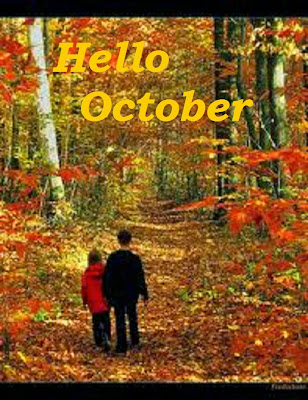 I feel just like a child on Christmas Eve.
In less than an hour, I’ll be welcoming October, my favorite month of the year!  I’m not going to go on and on like I usually do on this day. By now, most of you know how I feel about October and fall, in general.
I asked Mr. H. a couple of days ago if he’d read the blog post I put on that day. “No, I haven’t,” he said, “but I’m pretty used to your October posts. It probably won’t be a surprise, will it?”
Informing him that October wasn’t here yet, I said, “Don’t get ahead of yourself. There’ll be another post on the first. You can count on it!”
I’ve always loved fall!
I can’t say with one hundred percent certainty, but it’s been bandied about in my family that my very first words were, “How long is it till October?”
Strange – my love for autumn, considering I was born in springtime, don’t you think? There’s no explaining it. Nor the fact that my favorite color is orange!
All I know for sure is that, in April, when everyone I know is oohing and aahing over springtime with its flowers and new growth; and in June, when 95 percent of the population is headed for a beach somewhere to burn their bodies to a crisp and eat seafood; and in July, when they’re rushing to get in the last swim, the final picnic and camping trip, I yawn and say…
“How long is it till October?”
~~~
Posted by Peggy~ at 11:47 PM

Sweet Peggy. I like the fall to. Its so quiet and peaceful after a long busy summer.

Nice post,Peggy. You write so well. Always keeps my interest.

October is a lovely month. Its what comes next thtat's so bad.