I'm Not An Invalid! 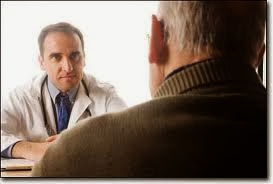 When things happen that we don’t understand we wonder why, but sometimes never know the answer.
Mr. H. had bad back pain for about a month. He’s had back problems off and on for years, but the pain usually goes away after a week or two and lots of rest.
This time it didn’t.
He finally gave up and went to the doctor, who gave him a prescription for pain and sent him for an MRI. The very next day, after he'd had it done, the doctor called and told Mr. H. to come to his office to discuss the results. I went with him.
While we waited in the exam room, we wondered what could be so important. It makes you a little nervous when the doctor, himself, phones and tells you to come in that very day.
When he walked in, he stopped in front of Mr. H. and said, “How do you feel?”
Mr. H. replied, “Not too bad.”
The doctor looked at him skeptically and said, “According to your MRI, you should be paralyzed from the waist down!” Then he went to his computer and showed us a picture of what his spine looks like. It appears that every disc – not one or two – but every disc in his back is compressed!  No wonder he was in so much pain.
I was not surprised. Many years ago, he was in the hospital in traction once and had many tests done. The conclusion of his doctor at that time was that he could end up in a wheelchair someday! I had pushed that to the back of my mind and Mr. H. never acknowledged it at all.
But now, the doctor wanted to set him up with a neurosurgeon to see if surgery was necessary. In the meantime, he was to keep taking the prescription he’d given him. No problem. He cooperated and, although it took a few weeks, we finally met with the neurosurgeon.
After he’d looked at all Mr. H’s records, he said surgery was not necessary at this time, but if he should start having pain that won’t stop again, to call him and we’d reassess the situation. And he suggested Mr. H. walk with a cane so as not to take a chance on falling.
Great! We left there feeling very good about his condition. The pain pills had lessened the pain a great deal and we weren’t looking at surgery in the near future. Maybe never! And the doctor didn't even mention a wheelchair.
It was a wonderful day!
At my insistence, he finally bought a cane, but uses it only occasionally. It doesn’t matter how much I complain about him doing too much, he never stops doing most of the things he’s always done, although he is a little more cautious. When I complain too much, he insists, “I’m not an invalid, and I’m not going to be an invalid!” He simply refuses to accept anything bad.
I wonder…. If everyone were blessed with the kind of determination Mr. H. has//would there be fewer serious illnesses? Are many of them just accepted by us after a test shows unfavorable results?
I had an uncle who was told in his forties that he had a brain tumor.  Surgery was done, but afterward, the doctor sadly informed him that it was impossible to “get it all.” He said, “I’m sorry. There’s nothing more we can do. The tumor will continue to grow. I’ll give you no more than five years.”
My uncle replied, “You don’t give me anything! I’ll have as long as God gives me. You have nothing to do with it!”
The doctor shrugged, shook his hand and wished him well.
My Uncle Dan lived twenty-five years! He and his wife traveled extensively, and  welcomed grandchildren and even one great-grandchild into the world before he died. He enjoyed life more than ever after a doctor “gave” him only five years to live.
These are two special cases, of course. There are numerous times when doctors and tests are right on target and people have to battle life-threatening illnesses. Some lose. Some gain a little more time if they’re lucky.
But why do some, like my uncle and Mr. H. seem to win by just not accepting bad news from doctors?

~~~
www.amazon.com/author/peggytoneyhorton﻿
Posted by Peggy~ at 2:37 AM

Two brave men with minds of their own. Nice story Peggy.