The Summer Of The Derecho 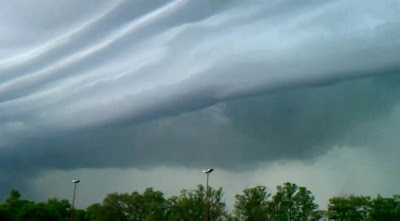 Last Friday’s classic derecho, a fast moving line of severe "straight-line" winds associated with a squall of violent thunderstorms, travelled close to 700 miles in 10 hours.
The storm system brought 91 mile per hour winds, rain and lightning, disrupting electricity for as many as 4.3 million customers from North Carolina to New Jersey. The widespread blackouts are the worst in the U.S. since Hurricane Irene struck in August. Utilities said the effects were equivalent to a hurricane. The storm came in with no warning; no one had time to prepare. At least 23 people were killed, the Associated Press reported.

As I read the newspapers, watched weather reports on TV, and surveyed the devastation wreaked by this storm around the country, I couldn’t help but think that every so often, God lets us know that He is still in control! We have no power over whatever He sets into motion.

We are totally helpless!

As the tempest raged outside my home and huge trees bowed into semicircles, I felt vulnerable and terrified! My husband and I watched in amazement as a number of enormous limbs were ripped from a large tree and flung several yards away like small sticks. If you are a God-fearing person, you were probably on your knees praying, as I was, while forceful winds threatened your home, those of your neighbors and loved ones – and your very lives.

Our old house creaked and moaned. It was difficult not to worry that the 48-year-old structure might be reduced to smithereens by the tremendous force this monster was applying. But thank God, it was not!

When the winds began to subside and we assessed the damage, we realized that we were lucky compared to many others. We lost part of a tree, a few shingles from the roof, and had a lot of tree branches and other debris scattered about our property. But, thankfully, we didn’t lose our electricity! Two of our children did. And both of them live only a short distance away. The outages were “spotty.” One person would be without power while his neighbor across the street wasn’t. It was uncanny.

The next morning, Saturday, my son called and asked if I’d take him to get ice for his cooler so he and his wife could at least have cold drinks. His car was low on gas and a friend had already told him that he should wait a few hours before trying to get it because there were long lines at the pumps.

And there was no ice to be found. We spent two hours driving in all directions hoping to find it somewhere, but there was none! Every service station lot was jammed with cars bumper to bumper waiting for gas. It was a mess! I felt like we were in a time warp.

Five days later, the Fourth of July, more than 1.37 million customers remained without power as utility companies struggled to respond to unexpected damage across 10 U.S. states.

It will take a while to set everything straight again. I suspect the summer of 2012 will long be remembered as, “The Summer of the Derecho.”

And I am given yet another reason to dislike summer and yearn for the freshness of fall and winter as I always do! 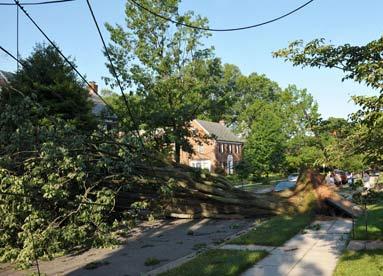 Great discription of the storm peggy. Sounds like you had the right idea. Prayer. Glad you and your family got by with little damage. jeanette

It was a terrible storm, no doubt about it. nobody escaped it completely. good post about it peggy.

Good report on the storm. it was very scary, I hope we never have another one like that.

Once again our classic argument about the seasons!!!! LOL. Love you!

Yes Peggy the Lord is still in control of all this earth, but I believe that we as a nation has forgotten. We don't often pray until tragedy hits, we forget to thank Him daily for all He gives us, our country has become one of letting each person do their own thing regardless of the out come, our morals are gone and the devil is working 24/7 to keep it happening. It is time that all God fearing people take a stand for what God intended for us to do, and that is abide in Him.

I agree with everything you say, Drema. I like to think most people are thankful for their blessings, but just sometimes forget to praise our Creator for them. Tragedy reminds them. Maybe that's God's intention - to shake us up so we don't forget that He is in control! This one should be a lesson not soon forgotten!