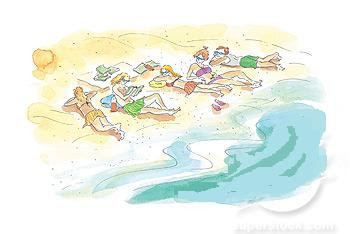 I hate summer!
Sun worshipers think I’m a little loony and fling all sorts of insulting remarks my way. So be it! It doesn’t change my mind one iota.

It seems to me that everyone tries too hard to enjoy the summer months. They run around frantically, planning vacation trips, shopping for bathing suits and other scanty summer attire – making hotel reservations. Almost every person you meet is excited about an upcoming trip – most often, to the seashore. They seem to love lying on hot sand in intense sunshine for days, baking their bodies to a crisp. Why? Because they think it makes them look healthy. More attractive.

Never mind the damage to their skin. We’ve all seen sun worshipers in their 30’s and 40’s who look 50 or 60 because their skin is wrinkled and leathery.

Some I know are having skin cancers removed regularly because they baked in the sun all of their lives. They thought it made them more appealing. Or would that be a-peeling?

I suspect that some, who, like me, hate summer, just go along so they won’t appear “different.” It’s what I call forced merriment! But I don’t mind being different. In fact, I prefer it when it comes to summer. I choose soft, white skin over leathery tan skin.

I hate bugs, too! But it’s impossible to avoid them during hot weather. No matter how cold the winter, they find someplace to survive until it’s warm enough to come out of hiding and stalk their prey – which is often a succulent human body! They invade your house through the tiniest openings no matter what kind of bug spray you use. And just try to stay outside on a summer day for more than ten minutes without getting bitten by a mosquito or a sweat bee.

I was talking to my friend, Carol, on the phone today when she suddenly squealed.

“Something just stung my face,” she said. “I’ll call you back.”

She’d been sitting by her pool, enjoying the sun, even though she’s had at least a half dozen squamous cell skin cancers removed in the past few years. I often tell her she shouldn’t be baking in the sun and she agrees, but keeps doing it anyway. I don’t get it!

We’re not all alike. Guess it would be a boring world if we were. Carol lives in Florida because she prefers heat, snakes, bugs, and hurricanes to cold weather!

I live in West Virginia because I love mountains, snow and the changing seasons. It really would be “Almost Heaven,” as John Denver's song suggests, if there were only three seasons:

I guess some people hate summer. I happen to like it mself. Its very good for arthritis. Gerri

anybody who reads your blog knows you love the change of seasons. and especially like winter. Jon

I think I could do without hot weather too peg. But it seems we're stuck with it unless we want to move up north. Good post.

I too used to be a tan freak, then went to tanning beds, because the heat from the sun became to much, then found out the dangers of tanning beds, now if I get any sun its from mowing the lawn and I try to wait until the sun goes down. Getting older makes you wiser than tan.

It took only one bad sunburn for me to learn my lesson. I was careful from then on.
I guess a few benefits come with aging - and wisdom is one of them. If only we could learn some of these things while we're young!

I live in the southern tip of Texas, the second hotest place in the U.S. (Death Valley is No. 1) When I lived in WV, I had a friend who moved back to Northern Michigan so he could enjoy the "four seasons." Go figure!

Your friend is a smart fellow. Summers are probably short in Northern Michigan. I'd like that!