Lost In The Woods ~ Part One 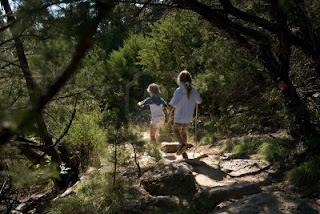 When I was young, summers at my grandmother’s house were full of fun and surprises. My aunt Judy and I were the same age and there was no end to the things we could get into as we played in the mountains and on the creek banks of the little coal town where my grandparents lived.

Each morning after breakfast, when Mom said, “Okay girls, go outside and play,” Judy and I scrambled out the back door letting it slam just as the words; “Don’t slam the door!” came out of her mouth. We usually didn’t come back until we heard the mine whistle blow. That was our signal that Pop was on his way home from the mine and it was suppertime.

Today was a little different.

“What do you wanna do?” Judy said.

“Let’s walk up on the hill behind the house and find some berries,” I said. “Maybe Mom’ll make a cobbler.”

“Okay, but don’t forget what Pop said about rattlesnakes liking blackberries, we’ll have to watch out for them.”

After roaming around in the mountains for a long time, all we saw were a couple rabbits and several squirrels. No berries. Of any kind. When we got tired, we sat on a big rock and talked a while. But when I thought I heard a rattlesnake, I said, “Hear that? Let’s get outta here!” and we took off running.

“My brother, Jack, claims there are bears living in these mountains,” Judy declared. “Big black bears!”

“The mine whistle hasn’t blown yet,” said Judy. “It can’t be suppertime. But if you’re scared, we’ll go.”

The trip back to where we came up the mountain seemed longer than usual and when we realized we’d gone farther than we thought, we stopped to rest. “This doesn’t look right, Judy. I think we’re lost,” I said.

“No, we’re not.” She said. “It just seems longer ‘cause we’re tired. C’mon, let’s keep going.” We finally found a clearing and were able to go down the mountainside easily. But at the bottom, everything looked different. Our house was nowhere in sight and it was starting to get dark.

“See, Judy; I told you! It’s past suppertime.” I said. “We are lost and we didn’t hear the mine whistle ‘cause we’re too far away to hear it.”

Up the road a little ways, we could see a man sitting on his front porch. He saw us, too, and called out, “Are you girls lost?”

“Maybe,” Judy said. Walking toward us, he asked, “What’s your name?”

“I’m Mr. Pittman," he said. "I think my wife is related to your family. You’re quite a distance from home.” I was about to cry, but Mr. Pittman kept talking.

“When people go up into these mountains, they often come down far from where they went up. Come on; I’ll take you girls home.”


Note: I called my grandmother, "Mom," because that's what I heard her children call her. Seemed natural to me.)

Good story peg. Can't wait for part 2. Sounds like you had a nice childhood. Gina

I love this. I'll be back tomorrow for sure. good story!

Isn't it unusual to be the same age as your aunt? good story anyway. I'll be back tomorrow for part 2.

Ben - My mother was my grandmother's oldest child. She had me only three months after her mother had her last child. I guess it is unusual, but it was nice. I had a playmate when I visited my grandparents. We've been close all our lives.

A good story. It must have been very different then, Now it would be dangerous for two young girls to roam around in the mountains alone like that. Looking forward to part 2.