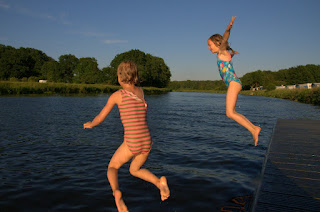 Another month is almost gone and we will soon observe Memorial Day, an American holiday that honors men and women who died while serving in the U.S. military. Originally known as Decoration Day, many Americans decorate the graves of their loved ones and hold family gatherings to celebrate the holiday that unofficially marks the beginning of summer.
This year, school is already out where I live and children are looking forward to all of the fun activities of summertime, especially swimming.
My twelve-year old granddaughter got into a little mischief, just today – very early into her summer vacation. The temperatures were in the high eighties and she and a friend thought it would be refreshing to jump off a boat dock and take a dip in the Kanawha River. It was only the two of them, with no adult anywhere within hearing distance... but somehow, her mother found out what she’d done, resulting in Granddaughter losing some privileges in her first week of freedom from school. Not only did her mother feel it was a dangerous thing to do, but also, was concerned because the river is known to be full of chemicals which could be harmful.
Ah, to be young again! I remember doing many things at her age and older that I shouldn’t have. My parents found out about some... but not all... and I have great memories of my childhood and early teens.
In the small town where I grew up, there was this mountain that had to be climbed. It was an unspoken dare. You were considered a coward if you didn’t climb it by the time you were thirteen or fourteen years old. It took a couple of hours to get to the top, tramping through a densely wooded area – some of it very steep. One wrong step resulted in a downward slide for yards before you could stop and gingerly climb back up again. When you finally reached the top, you were standing on a huge rock cliff from where you could see the whole town. It was a beautiful sight, but strictly natural. There were no fences or railings of any kind to keep you from falling, which would have been deadly.
My parents surely would have had heart failure if they’d known I was ever on that mountain. But, of course, I was.
Like my granddaughter, I couldn’t stay away from the river either. Didn’t matter how many times I was threatened or punished, I kept going when I thought my parents wouldn’t find out. Somehow, the lure of the river was more powerful than the threat of punishment.
I climbed trees, although tree climbing was forbidden, ventured farther from my home than my parent's boundaries allowed, and fought with anyone who dared disagree with me. Somebody’s mother was always phoning mine to tell her what I’d done to her sweet daughter or son. I was punished. A lot.
But I grew up in spite of it all. Fairly well-adjusted, I think.
Granddaughter will, too.
She reminds me a lot of myself at her age. It’ll be interesting - and a little painful - to watch her grow and learn all her lessons the hard way as I did. And hopefully, she, too, will look back one day and remember these days with fondness.
Childhood is the most beautiful of all life's seasons!
Posted by Peggy~ at 3:46 AM

What great memories this one brings back. Nice post Peggy.

This is great Peggy. Your granddaughter is starting off the summer with a splash you might say. :) Hope she survives it. Good post. Jeanette

You're right Peggy.. Childhood is the best time of our life. There's nothing else like it. luella