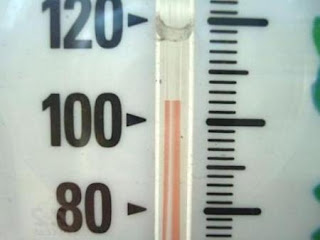 ﻿“It’s supposed to be one hundred degrees tomorrow,” said Mr. H. as we cleaned up the kitchen after dinner yesterday.

“Oh, well. It’ll be over soon enough,” I said. “We’re already half-way to Christmas, you know.”

Mr. H. chuckled, squinching up his face and turning his eyes into little slits.

“Only you would think about Christmas in the middle of June when the temperature is 100°."

“I’m not thinking about it really. Just stating the facts. Yesterday, the 25th, was exactly six months until Christmas day. Time goes by so fast; it doesn’t pay to get too attached to one season ‘cause before you can turn around, another one is here. Only yesterday, I heard a man say that we have only two seasons in the United States: Summer and Christmas!"

Almost 24 hours later, my computer weather adviser read 99°. I didn’t think it was going to hit the predicted 100°, but tonight, the TV news reported that it actually made it about six o’clock this evening.

I didn’t go outside all day and don’t intend to tomorrow either. I’ll just enjoy my summer hibernation until the temps drop into the low 80’s at least. I’m sure I can find plenty to do inside.

Don't even mention Christmas. But your right about time passing so fast. it sure does. good post.

you and Mr. H have some good conversations don't you? I like this a lot. Cute.. and true. Megan

Your so right peggy. Time goes so fast it's hard to keep up. I wish it was like it used to be when we had time for all the seasons insted of moving from summer right into the Christmas season. sometimes I feel carried along with it helpless to do anything about it. Do you feel that way?

Yes, Anonymous, I do feel that way. Swept along with the rapid passing of time -- and powerless to change it. How I sometimes long for the simplicity of the good old days!