Lost In The Woods ~ Part Two 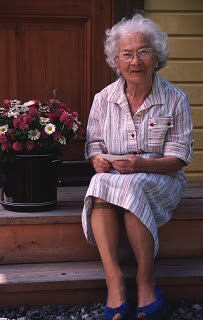 Mom was waiting on the porch. I couldn’t tell if the look on her face meant she was mad or scared. Probably a little of each. But she did seem glad to see us. She hugged us both, and thanked Mr. Pittman for bringing us home, then rushed us into the house.

Supper was waiting and, as we ate, Mom lectured us about how bad we were, “You scared me half to death! I tell you the truth; I don’t know what keeps you girls from getting your killin’ done! God must have a band of angels watching over you! After you finish eating, I want the two of you to go sit on the porch swing and don’t move a muscle until bedtime.”

As we swung back and forth listening to the screeching of the old swing, somehow I knew Mom wasn’t going to come and sit with us like she usually did after supper – letting us cuddle up to her plump sides while she told stories and sang songs – I just knew it!

After tucking us in and kissing us on the forehead, she said, “Good-night. Sleep tight and don’t let the bedbugs bite.” Then she closed the door.

Snuggled deep into the billowy feather mattress, I said, “I don’t understand why Mom was so upset with us. We would’ve found our way back sooner or later."

“I don’t know...” Judy said. “If you hadn’t got scared and wanted to go home, we might have wandered around in the woods past dark and then who knows what would have happened to us?”

“I told you, I was not scared – just hungry. Now don’t say that again!”

“Then why’d you take off running when you thought you heard a rattlesnake?” Judy jeered.

“Well, you did, too. Besides, Pop warned us about snakes. I’m not gonna just stand there and let one bite me.”

“But we didn’t even find any blackberry bushes, so there was nuthin’ to worry about.” Judy said.

“You were really afraid when I told you Jack said there’s bears in the mountains. That’s when you said, ‘Let’s go.’ Remember?”

"How many times do I have to tell you? I was not afraid! Now you stop saying that; you're making me mad."

"You were, too, afraid! You were about to cry. I saw tears in your eyes."

“Okay, you asked for it. I told you to stop it!” Jumping up in the middle of the bed, I began pulling her hair and hitting her as hard as I could.

About that time, the door sprung open and Mom said, “What’s going on in here?”

“She jumped on me for no reason,” Judy told her, rubbing her head.

“I warned her but she wouldn't shut up,” I said.

“All right, Judy,” Mom said. “You go upstairs and get in bed with Grandma. Patti can sleep here by herself.”

“Okay, but I bet she’s gonna be real scared all alone in the dark!”

The last thing I heard as the door closed was her giggling.

And I yelled, “Just you wait till tomorrow, Judy!”

This is a very cute story Peggy. you and Judy must have been a handfuf for your grandmother. I think you must have had a fun childhood. Sheila

She was really getting the best of you with her teasing wasn't she. Funny story. Is there more?

did you wallop her the next day peg? cute story. sam

entertaining story peg. I hope you have more about you and Judy. Pam