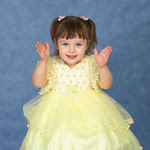 Every family member carries with him at least one or two memories from the past that make him smile, just thinking about them. These may be funny antics done by young children or even something an adult did or said inadvertently – or intentionally – that was comical or embarrassing. These precious memories are what make us feel warm all over and why we are drawn close to our family. They are the very essence of “family ties.”
Today I was thinking about something amusing that my granddaughter used to say and do. Even at only four or five years old, she loved the American rock band, Bon Jovi. Any time several family members were together and Bon Jovi appeared on the TV, Danielle jumped up and down, clapped her hands and yelled, “Bon Jovi!” Then she’d go around the room speaking to one person at a time in this fashion: “Bon Jovi! Can ya’ say, ‘Yea,’ Maw-Maw?” And each person had to say, “Yea,” and clap his/her hands together before she’d move on to the next person. “Bon Jovi! Can ya’ say, ‘Yea,’ Uncle Lee?”
“Bon Jovi! Can ya’ say, ‘Yea,” Grandpa?” And so forth. It didn’t matter how many were in the room. She challenged everyone to say, “Yea.” This happened literally every time she saw either the band Bon Jovi or lead singer, Jon Bon Jovi appear on TV or heard them on the radio.
Danielle is now in her mid-twenties and that expression remains our family’s catch-phrase for most everything pleasant. Any time something good happens, at least one of us never fails to clap his hands and say, “Can ya’ say, ‘Yea?’”
I think it’s one of life’s sweetest pleasures that an innocent child can inject something so enjoyable into a family that it lasts forever. 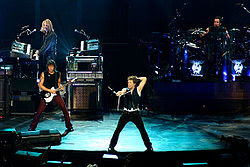 I can imagine this peg. I had granddaughter who loved Michael Jackson. It was hare to calm her when she saw or heard him. Cute post. Patti

Sweet prggy. The picture is cute too. Is that your granddaughter? linda

Love this one. So cute!