Memories Of The Fourth of July 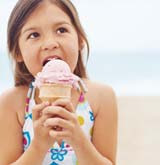 Independence Day, commonly known as the Fourth of July, is a federal holiday in the United States. It commemorates the adoption of the Declaration of Independence on July 4, 1776, which declared our independence from the Kingdom of Great Britain. Each year, on July 4, Americans celebrate that freedom and independence with barbecues, picnics, and family gatherings. Many politicians appear at public events to show their support for the history, heritage and people of their country. The American flag, the most common Independence Day symbol, is displayed in front of many homes and buildings.

Although he’s been gone for more than two decades, I cannot think about Fourth of July celebrations without remembering my father. One of my most vivid memories of him centers around this special holiday.

When I was a very young, we lived in a small coal-mining town. Every Fourth of July, my dad would have a three gallon container of ice cream, packed in dry ice, delivered to our house early in the morning. Refrigeration was poor in those days so it was important that all of it was eaten that day.

My father got the word out to every child in the neighborhood that there would be free ice cream cones at our house all day. He’d sit on the back porch and, as eager children appeared, he’d dip the ice cream into cones and hand them out, smiling broadly. Later in the evening, he’d slice up the biggest watermelon he’d been able to find and give the juicy slices to anyone who wanted them. He thought it was great fun to watch the kids eat it – spitting out seeds while juice dripped off their chins and ran down to their elbows. It was a big day for the children of this humble coal-mining town, and for my dad, as well.

It is hard-working, generous people like my father who helped make America what it is today.

Every day thousands leave their homeland to come to this great country and begin living the American Dream. Those of us who were born here are very fortunate! 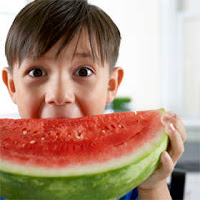 Really nice post peg! You must have loved your father very much.

Sounds like your dad had a good time on the fourth. Good memories for you.

Very good memories for me, Jim! I'll never forget them.

very good peg. I like your pics to. sam