I Don't Believe I Know Him 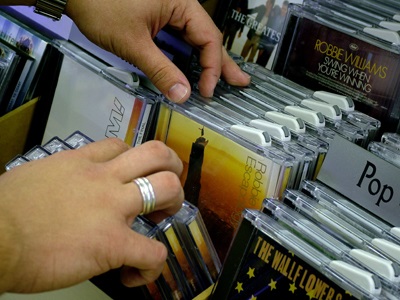 I loved the song!

I’d heard it on the radio for weeks but couldn’t seem to catch the name of it. Or the singer’s name. Every time the song played, I listened carefully, but the DJs weren’t bothering with titles or artists.
And then I got lucky.
One evening while I was preparing dinner, I heard the familiar song. When it went off, I stood very still, not moving a muscle so I’d hear if the name and artist were mentioned. And sure enough, they were!
However, the title rolled off the DJ’s tongue so fast I didn’t catch it, but I did get the singer’s name. I distinctly heard… “by Harold Smith.”
Quickly writing it down, I said aloud, “That’s enough! I can buy the CD now.”
A few days later, while at the mall, I went into the first music store I saw. First, I looked through a rack of CDs hoping to find it myself. But I couldn’t find anything by Harold Smith.
I’m just in the wrong section, I thought, and as I started walking to another aisle, a young man stopped me. “May I help you find something, Ma’am?” he said. “I’m looking for a song by Harold Smith,” I told him.


Hesitating, he said, "Hmmm, I don't believe I know him. What's the name of the song?"

“That’s just it,” I said, “I don’t know. But it’s popular. I hear it on the radio every day.”
“Do you know any of it?" he said, “how does it go?”
“I can’t sing, but it starts with, ‘I could stay awake just to hear you breathin’,” I told him.
A strange look came over this young man’s face and I could see he was struggling to keep from laughing, but then he said, “Ma’am, I think you want, I Don’t Wanna Miss a Thing, by Aerosmith.”
It took a few seconds for my brain to process what he’d said but it finally started to sink in…
Harold Smith. Aerosmith. Of course! Giggling nervously, I told him I’d take the CD, paid for it, thanked him and left, feeling quite stupid! I never went back to that particular music store again. Would you?
That evening, when I told my family what I’d done, they had a good laugh at my expense and I was sorry I'd mentioned it.
Sometimes I’m my own worst enemy!
It’s been several years since I made that blunder, but do you think they’ve forgotten it?
Not a chance!
Someone is always asking me if Harold Smith has recorded anything new lately.

Hilarious Peggy! Don't you hate it when that happens?? HaHa!

So funny! thanx for the laugh.

another good one peg. sam

It wouldn't be forgotten in my family either, lol.

LOL you've written the story of my life. I love it.

Too funny! Things are beginning to make sense now! Like the time I went to Staples and asked for the "magneta ink!"

Oh Peggy, we are truly cousins.

Don't worry about telling on yourself. I could entertain people for hours... and do!

Johnson said...
This comment has been removed by the author.
Wednesday, 03 July, 2019