That Seems So Long Ago 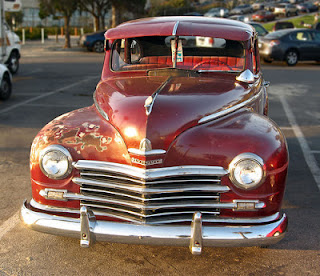 I wouldn’t say I’m getting old, but when Mr. H. and I had our first date, he picked me up in a 1947 Plymouth that was several years old. Stick shift, of course. Not only that, but his hair was bleached blonde, which was a fad in our high school days. He also sported white buck shoes. I don’t remember for certain, but I probably wore a full skirt with a crinoline petticoat underneath and brown and white saddle oxfords. And I’m sure my hair was in a ponytail.
Gasoline was 25 cents a gallon and movies were only 50 cents. It doesn’t sound like dates were very expensive until you learn that minimum wage was only $1.00 an hour.
You could buy a brand new car for around $1500, but who had $1500.? According to statistics, middle class Americans had incomes between $3,000 and $10,000 per year.
That seems so long ago. And it was, but the vast changes that have taken place since then boggle the mind!
Fast forward almost a half century: Last Saturday night, our grandson escorted a lovely young lady to a high school prom. Dressed elegantly, in coordinating outfits, they smiled and posed for an hour or more while pictures were taken of them and the couple with whom they were double-dating. Then they were picked up by a shiny, black limousine and driven to an upscale restaurant for dinner before being delivered to the prom.
We could have had at least a year’s worth of dates on what was spent on that one evening. She wore a beautiful long gown with accessories to match, and had her hair done professionally, while he rented a harmonizing tuxedo, bought a wrist corsage for her and a matching boutonniere for himself, made reservations for dinner, and last, but not least, rented the limousine!
When Mr. H. and I went to our senior prom, I, too, wore a long gown with matching accessories, and he bought me a corsage, but that’s where any similarity ends. I did my own hair; he wore dress pants and a white sport coat and picked me up in the ’47 Plymouth. My mother took a few pictures of us with her Kodak camera. We went straight to the prom. After it was over, we and some of our friends went to a restaurant for a late snack and then went home.
The most exciting event of our high school days was over!
I wonder if there’ll still be senior proms fifty years from now. If so, how different will things be than they are today?
Obviously, I won’t be around to see for myself, but my imagination conjures another grandmother – perhaps one of my granddaughters – writing, as I have, about the astonishing changes she’s seen in her lifetime.
And, like mine, her heart will swell with emotion as she recalls the sweetness of her youth.

What a great story! I love it! You are so right Peggy. Things change to fast.

I love this Peggy! Brought back a lot of memories. You're the best! Keep writing! Joe

This is a good story. As usual, the parting shot in your last lines was impacting. You are really good, Peggy. I hope you write for many more years.

I thank you for the picture that you posted with this story. I now have a picture of every Plymouth auto built from 1930 to 1950.
I also remember back when that auto was still running, but unlike most Americans, I always had a vehicle to drive. My uncle Ralph owned a Plymouth dealership, while another Uncle, (Uncle Fats), owned a salvage yard.
I now live in Kansas, with a huge barn in which I keep all my favorite vehicles; which includes OTR trucks, as well as American built auto.

Glad I could help you out, Mr. Moses. This one's a real beauty, too, isn't it?