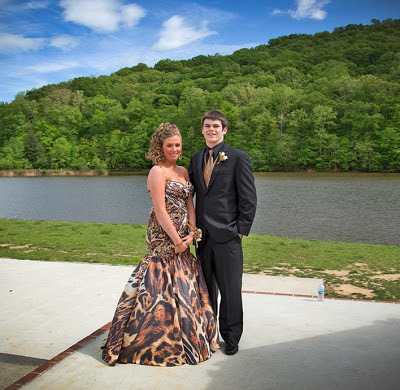 After yesterday’s continual rain and dark skies, I was so hoping I’d open my eyes to sunshine this morning, but it was not to be; there was not a golden ray in sight! Furthermore, thunder rolled across a gray sky and rain peppered the windows.

Rather than complain, I chose to outsmart the weather gods and be happy despite the second dreary day in a row. On went every light in the house and some loud, bouncy music. That usually drives the blahs away for me.
When I finally got around to looking at Facebook, the first thing I saw cheered me up like nothing else could. My grandson had posted some pictures of himself and the young lady he escorted to the prom last Saturday evening. They were not the posed, “smile pretty” kind of pictures that had been taken earlier in the afternoon, before the limousine picked them up to drive them to dinner and the prom.
Even though I was there, I somehow missed the snapping of these pictures. I don't know who took them. Or when. But the young couple apparently relaxed enough at some point to make funny faces for the camera... and they seemed to be totally enjoying themselves. I found myself giggling as I examined each picture closely. 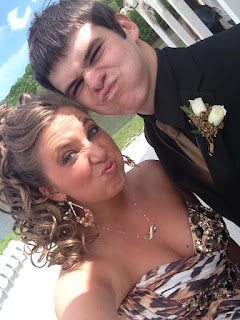 ﻿I often think the young hold the key to happiness. They enjoy life completely without taking it too seriously.

I wonder… Where does that capability go when we get older?

Good question Peggy. The young do seem to enjoy life more. I'd say it's because they don't have as many responsibilities. Who knows? Maybe they have a secret. :)

Maybe we get jaded. I know I have. Especially in these days that we live. I have to admit tho I have been making a lot of "different" faces at the t.v. these days. LOL

Chase is a handsome young man and his date is a beauty, we should always look for fun in life no matter what age.

Thanks, Drema! I agree that we should always look for fun - no matter what age... but many don't.