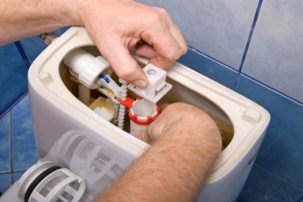 On March 3, I wrote about all the things that had gone wrong in January and February – and that I couldn't wait for 2013 to be over because I feared it was bad luck. At least, for me.


A friend read the blog post and reprimanded me for being superstitious. When I saw that her message started with: “Peggy, Peggy, Peggy!” I knew I was in trouble. It made me feel the way I felt when I was a little girl and heard my father shout, “Peggy Lou!” in his gruffest voice.

I wrote back to my friend explaining, “Sometimes one says things in a blog post just to make a point; I’m not really superstitious."

However, March was rather bad for me, too, and I’m beginning to wonder. Perhaps 2013 truly is a bad year for me!

My daughter, who lives in North Carolina, informed me in mid-February that she and her family would be coming home for Easter. Wonderful! We hadn’t seen them since Christmas and looked forward to the visit.

I began making preparations. We have a large family. For our special holiday dinners, I usually cook for at least twelve people. More if unexpected guests show up – and they often do. So I find it easier to cook ahead and freeze what I can. This lets me spend more time with my family and I don’t get as worn out.

But, right off the bat, I began to encounter problems. The first was a defective toilet in the guest bathroom. Now, Mr. H. is a first-rate handyman who can repair most anything, but his first attempts to fix this necessary porcelain fixture were futile. He didn’t give up, however, but persisted until he’d bought almost every possible new part that one can replace in a toilet and finally, only a day before our daughter and her family arrived, it was working properly.

There’s more. Earlier in the week, while Mr. H. was still focused on the toilet, I noticed that the food in the refrigerator wasn't as cold as usual. When I told Mr. H., he looked it over, got out the vacuum, took the grill off the bottom of the fridge, plopped down in the floor and vacuumed underneath it. I said, “What do you think?” He answered, “I think there was an awful lot of cat hair under there!”
“Could that cause the problem,” I asked. “Yes, it could,” Mr. H. said. “Let’s watch it and see what happens.”

What happened was, every day the food and drinks got a little warmer. When I got up one morning, poured a glass of orange juice, which does for me what coffee does for most people, and it was almost room temperature, I said, “That’s it! You’ve got to do something about the refrigerator!”

Like the toilet, his attempts to get the darn thing to do its job got him nowhere for days. Every morning, we got up convinced it would be cold, but it wasn’t. The freezer seemed to be working fine but the fridge was just not cold enough!

Luckily, we have a smaller fridge in a downstairs area off the family room. So we transferred the most important items to that one. We figured we could barely limp along this way until after our company left.

And so… on the final day, with everything done, dinner cooking and me in the bathroom getting ready for the arrival of our guests, it looked as if everything would be okay.

But it was not to be.

Mr. H. doesn’t get stressed. About anything. But I’d swear he was about to blow when he came into the bedroom and said, “Catastrophe in the kitchen!”
“What now?” I squealed.


“Water in the cabinet under the sink. Looks like a hole in the disposer.”
He had put a bucket under it to catch the water, but as long as we didn’t use that sink, there would be no more water.


It took the two of us 15 to 20 minutes to take everything out of the cabinet, clean up the mess and put everything back.
Okay. I now had to serve dinner to eight people today and twelve tomorrow with a “cool” refrigerator, only one side of my sink available and no disposer. “I can do that.” I said, trying to make the best of a bad situation.

Check back tomorrow for Part 2 of this tale of woe...

Oh my Peggy, things do seem to happen in bunches don't they? I'm so sorry and can't wait to read part 2.

Great. Looking forward to the next part.

I will wait for part two before I state a comment, I need 24 hrs to come up with a profound statement.LOL

I know how it is when it seems everything happens at once. You feel like someone is out to get you and you just want it to be over!!!!