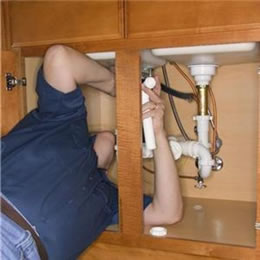 Daughter and family arrived a little past four. Dinner was ready but nobody was ready to eat, so we visited a while, snacking on veggies and dip, sipping coffee.


Dinner and clean-up ran smoothly, considering the unexpected problems. After visiting a while, I went to the kitchen to make pies for our Easter meal the next day – cream pies that couldn’t be frozen ahead.
The rest of the family were enjoying time together when my youngest daughter went to the kitchen sink. She turned on the water, shrieked, and said, “Mother, you have another problem!”
Turning my attention from the pie filling I was stirring, I looked at her while she demonstrated how she’d turned on the water and it spewed out from under the base of the faucet on both sides – to the right and to the left. It ran all over the counter top, under the toaster, the can opener and the coffee pot and she was attempting to clean it up before it got worse.
Mr. H. heard the commotion and came in to see what was going on. It needed no explaining. One could see that when the water was turned on, it shot straight out to each side like a horizontal geyser.
I’m sure he was getting tired of all the problems, as I was, but he calmly turned the water off, left for a few minutes and returned with tools. In no time, he had the faucet apart.
Our granddaughter was amazed! She said, “If this happened at our house, the plumber would have already been called.” Her mother and dad nodded in agreement.
When I said, “We may have to do that,” the idea was shot down.
Eldest daughter said, “I have faith in Kemper. He’ll get it fixed.” (Yes, our children call their father by his first name. It started as a joke, by this very daughter, when they were in their teens. Somehow, he let it pass and it stuck!)
Her faith in her dad was justified.
She and her siblings watched him repair things their whole lives. Everything around the house, cars, and most important, the broken toys they took to him with tears in their eyes, hoping Daddy could fix them, and he always did. They grew up convinced there was nothing their Dad couldn’t mend.
Faucet fixed, water cleaned up, and pies done, it wasn’t long before everyone was off to bed.
I prayed tomorrow would go well and we’d have no more problems.
But lying there in darkness, I remembered something my mother used to say when things went wrong: “The coward prays for release from pressure. The courageous pray for strength to overcome.”
And with that thought in mind, I fell asleep. I suppose God gave me that memory because He knows our trials aren’t over yet.
~~~
Everyone was up early and it looked as if it would be a great day. Although we were having our Easter dinner on Saturday because daughter and family had to return home on Sunday due to work and school schedules, it was no less a happy occasion – having our family together for a day.
When the twelve of us sat down to dinner, it was as if nothing bad had ever happened. Over good food, we talked about old times and laughed about everything.
It was an exceptionally enjoyable Easter celebration for my family.
But as I watched our loved ones leave the next day, sadness descended upon me before their car was out of sight. I never get used to goodbyes.
~~~
Mr. H. was chomping at the bit to start on the refrigerator. Out came the tools, gauges and refrigerant. Pulling the huge appliance out from the wall far enough so he could squeeze past the cabinet and into the space behind it; he took the back off and gassed it up.
But when he finished and tried to push it back where it belonged, it resisted. So he gave a really hard shove and it fell into the little holes in the floor where it had been resting for years. Suddenly, a noise! Loud. Scary. Like a jackhammer.
“What is it?” I said.
“Must be the water hose,” he said.
Under the sink he went, turning off the water to the icemaker, but the noise didn’t stop. He finally turned off the fridge and it stopped. But when he started to turn the water back on, he found the valve leaking and water running into the cabinet under the sink again! He had to go to the basement, turn off the water, pull everything out of the cabinet, clean up the water and find a new valve for the water to the icemaker and install it.
When his head bounced off a water pipe with a resounding thud, it struck me funny and I laughed. Actually, I couldn’t stop laughing. Guess I was getting a little punch-drunk.


A little later, we got the news that, on their way home, daughter and family got stuck in the middle of the backed-up traffic from the horrendous 95 car pileup on the Virginia - NC border. Thank God, they were not actually in the wreck, but were rerouted and it took them over six hours to get home when it usually takes three and a half.
And so… that’s where we are. Our bad luck started in January and has extended into April. We’re wondering if it will ever be over. It seems to be just one thing after another. I'm almost afraid to get up in the morning or answer the phone.
I’m praying for strength to overcome, but one thing bothers me:
According to the law of karma, all suffering is deserved.
If this is true, I can’t help but wonder what we’ve done to deserve all this.
Posted by Peggy~ at 3:27 AM

Wow! What a story. No wonder your punchy Peggy. Hope things let up soon and you have some good luck.

Unbelievable that so much could happen in such a short time. I'm so sorry. Hope it changes for you soon.

It's so sweet that your children knew their dad could fix anything. That confidence is lacking in families today. Good story about your bad luck. Hope it changes to good luck very soon Peggy.

you have to think positive peg. stop wondering what will happen next and expect it to be good. I promise this will work. Jan

You have a lot to be thankful for peggy. At least your daughter and family escaped being in the wreck.

Well Peggy, no words of wisdom came to me, except thank God for a wonderful husband that can fix things and seems so even tempered. When Ralph was living and in his good mind, he was that way, fix what was wrong very quietly while I was in a stew. Now I have to do it myself or depend on someone else. My comode has been broken for sometime now, and Michael got a new one for Christmas< he is so practial, well guess what, it is still out on the back porch and this is April. Maybe before winter it will be installed, I hope your troubles are over and that you will be able to enjoy the Spring and Summer months with no worries.