I Felt His Presence 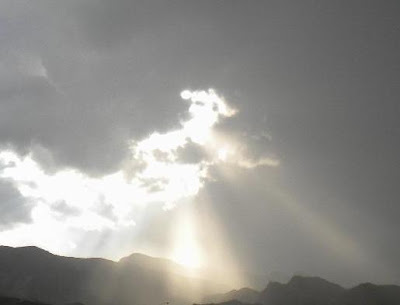 I had errands to run. It wasn’t something I wanted to do, but sometimes we have to make ourselves do things whether we want to or not. So, with a few words to Mr. H. about dinner and when to expect me back, I was off. Heading west. As I approached the on ramp to the freeway, I felt a little nervous. There was a lot of traffic. But there was no turning back and, like it or not, I was soon in the midst of it.

The past few days had been troubling for me. For starters, it was January. It had been cloudy for days on end and I craved sunshine! Furthermore, news of sickness and death among friends and family seemed endless, and I was depressed. In addition, I wasn't feeling well physically either. I was suffering my usual bout of post holidays stomach and intestinal problems. This has occurred every year for many years because I simply don’t have the willpower to avoid the foods that I know will cause problems.


As I drove, I thought about my father, who used to caution me every January: “Peggy Lou,” he’d say, in the same voice he used when I was five, “you’re going to have to stop eating things that are bad for you!”
“I know, Dad,” I’d moan, “but I love all the holiday foods; it’s so hard to resist.”

Without fail, at this point, he’d chuckle and say, “Well, I guess when it causes enough pain; you’ll stop doing it.” I think he sincerely thought I would.

“Yeah, I guess so,” I’d say, but that was many years ago and it hasn’t happened yet. I suppose it’s time to accept that I’m just a glutton for punishment.

Miles up ahead, a few rays of sunshine penetrated the dark clouds, changing the tops of the trees to a golden hue that warmed my heart and seemed to pull me, like a magnet, in the direction of the light. For a moment, I felt like one of those people you read about having a life-after-death experience; they always report being drawn to a bright light.

With cars buzzing all around me and one of my all-time favorite songs playing on the car radio, suddenly, I had the warm feeling that God was in His Heaven and all was right with the world!

And there in the privacy of my car – with a heart full of contentment – I spoke to God, telling Him what was going on in my life (as if He didn’t already know). I felt His presence and knew everything would be all right.

How quickly things change! When I left home, I was in pain, depressed and fearful of making the trip in heavy traffic. A few rays of sunshine, a little music, and some time alone with God – and all was right again.

The human spirit is a magnificent entity. Just when we think we can stand no more, something significant touches our soul...

And life goes on.

Wow! Peggy this is great. I love the emotion. Keep up the good work.

Very nice Peggy. Your description is beyond compare. Jon

I love this Peg. Very good.

If only everyone found themselves this easy. You make it sound simple to just go for a drive talk to God and all your troubles are over. I'm not sure it is.

I think we'd all do better in these cold winters if the days just had more sun. I'm glad you found His comfort.