What A Narrow Life! 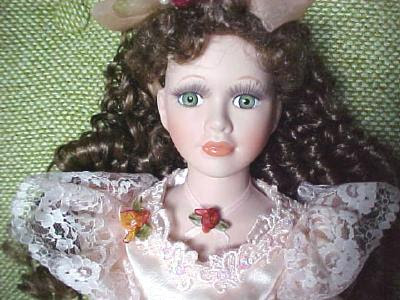 
Jenny and I go all the way back to first grade! She was such a cute little girl. The first thing one remembers about her is her hair. It was a shiny chestnut brown and hung all around in long, individual shoulder-length curls. She reminded me of one of those big-eyed, porcelain-faced dolls I’ve always feared. I don’t mean to imply that Jenny looked scary; it was just that looking at her sometimes made me remember my Pediophobia.


The second thing one remembers when Jenny’s name is mentioned is the way her mother doted on her. She brought her to school each morning – all the way to her classroom – to her desk! Nobody else’s mother did that. I watched curiously as Mrs. Smith preened her daughter, touching her hair lightly, inspecting every curl and adjusting the bow attached to the top of her head. Finally, she’d kiss Jenny on the cheek, smile and take her leave, waving as she exited the door.


I shuddered, imagining how embarrassed I’d be if my mother did that! But Jenny seemed okay with it.


We went to school together throughout elementary and middle school but separated to attend different high schools when we were about 14. Although we no longer saw each other every day, we still lived in the same town and never completely lost touch – until I got married and moved away. Even then, she and another friend paid me occasional visits for a while but that, too, began to wane as time and dissimilar lifestyles separated us.


Jenny lived in the same house her whole life. Literally. She was brought home from the hospital to a modest home smack-dab in the heart of a small town that parallels the Kanawha River. She grew up there and when her parents died, she and her husband continued to live there, and according to the obituary, she died there. I suppose Jenny was happy but I can’t help musing: What a narrow life!


And so... recently, when I found myself needing an answer to some questions from long ago, I thought of Jenny Lee first. If anyone would have the answers, it would be her; she knew everything about the town and its residents. Dialing the number I had for her brought nothing. Checking social media didn’t turn up anything either, so that’s when I resorted to Google. How simple! Once I’d entered her name in Search, the first thing that came up was her obituary. I almost fell out of my chair. So I did what I’ve always done when I was shocked or hurt or upset – dialed the number of my lifelong friend, Caryn.


“I’m depressed,” I said, as soon as she answered.


Caryn is so level-headed! “You’re looking at the glass half-empty,” she said. “Just be thankful you’re still walking around.”


“Uh,” Caryn reminded me: “the copy of Jenny’s obit is four years old!”


“Yes, but it doesn’t seem possible it’s been more than four years since we talked. I can’t believe she’s gone.”


Attempting to lighten the mood, Caryn blurted, “Well, at least she finally got out of Taylorsville!”


Chuckling, we said our goodbyes and hung up.


My last thought before going to sleep that night was, I wonder if Jenny Lee’s mother was waiting to fix her hair when she got to Heaven...

Oh, Peggy, you come up with the most original stories! I love this one but it has to be read carefully to understand what you're trying to tell us. It is good. I didn't know whether to laugh or cry.

Nice story, Peggy! They're all good. One gets the feeling you really put all of your energy into writing them. Thanks!

Peggy, I love this story. I know someone exactly like Jenny Lee. I wonder if it could be the same person. It's a great story.

Well for anyone else it might take awhile to write this story. I guess I’m Caryn and I just had this conversation with Peggy night before last. She was probably writing while we were talking, she never ceases to amaze me. Love you, my lifelong friend!