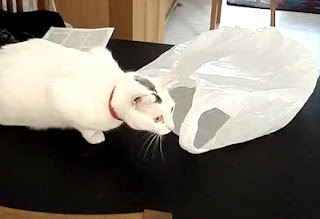 My son, Mark, has a friend, John, who swears that his cat regularly tries to commit suicide. When he told Mark about it the first time, Mark laughed and said, “Oh, you must be joking. Cats don’t commit suicide.” But John insisted that when he goes home in the evening, he can tell Clyde has tried to kill himself because he finds plastic bags everywhere, and, only the evening before, he'd opened the door just in time to see Clyde trying to put one over his head. “I stopped him in the nick of time,” he said.
When Mark laughed aloud, John became quite indignant, “Don’t laugh!” he said. “This is serious! You don’t know what it’s like living with a suicidal cat! I never know what I’ll find when I go home in the evening.”

Mark shared this story with us, his family, and we all had a good laugh at the very thought of a feline named Clyde trying to commit suicide.

It went on for a while with John telling Mark fairly often that Clyde was still trying to do himself in and he was afraid of what he’d see every day when he opened the door to his house. He hid all the plastic bags but feared that poor old Clyde was so depressed he’d find another way.

And he finally did!

Yesterday, when Mark got to work, John met him with a glum look on his face and said, “You won’t believe it! Clyde is at it again.”

Mark – ready for anything – said “What happened, John?”

Rolling his eyes, John said, “He climbed on the kitchen counter and tried to hang himself with the toaster cord.”

“Oh, John, that’s ridiculous!” said Mark. “He couldn’t do that by himself.”

“I’m not kidding, Mark!” John declared. “The cord was dangling all the way to the floor. I know old Clyde tried to hang himself with it, but thank goodness, he didn’t succeed!”

“Oh, I’m sure he will," John insisted. "That cat's just not right in the head.

ROFL!!! This is hilarious Peggy. Thanks for my first laugh of the day.

I'd say poor old John, wouldn't you? Sounds like he's a little off in the head to. Funny story.

Hilarious! I hope John is just kidding with Mark. If he's that far "off' he could be dangerous. :)

After I read this I hid all the plastic bags from my cat and unpluged my toaster and twisted the cord up behind it. Hahahahahah:)

Priceless! Poor old Clyde is in trouble alright but not from the threat of commiting suicide. His owner is his problem. Jennie

another good one peg. how do you keep coming up with them. this one is very funny. sam

Peggy I hope that poor old Clyde does not die from suicide, because I really needed a good laugh today and this did it, I can't type for laughing. Thanks for sharing.

I'm so glad old Clyde made you laugh, Drema, especially when you needed a good laugh. There's nothing like laughter to make us feel better, is there?

O'My Gosh! This is so funny! I cna't stop laughing and trying to imagine this guy telling this stuff. I wonder if he believes it or is just pulling Mark's leg?

Poor old Clyde is the one to fee sorry for. his owner is "Nuts."!