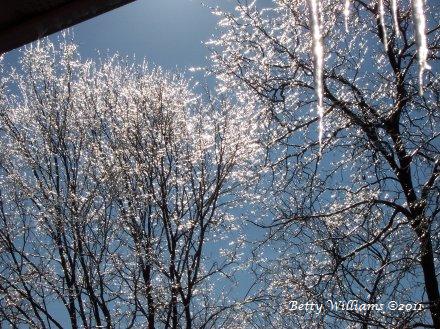 Okay everyone, only three more days to go until the long, cold, snowy, dreary, tiresome, monotonous, yucky month of January is gone!  In between this January and the next one, there will be eleven months—each with different qualities—some good, some not so good. No matter how you see them, any of them has to be an improvement.. Right?

My son is the most optimistic person I know concerning the seasons. Like most of us, he can tolerate most anything until after the holidays. After all, fretting about weather conditions pales in comparison to the excitement of getting together with family members at Thanksgiving for a huge feast and the anticipation leading up to Christmas with its joyful gatherings of family and friends, the shopping, the carols, the festive dinners, parties and other social events. Then comes New Year’s Eve with more parties and gala occasions to enjoy. All in all, we have about two months of fun, happy, times.

But on January 2nd, the fun is over!  It’s back to business as usual. Some of us go with the flow. Others don’t take it too well; they whine and complain the whole month! And when it snows all month like it has this year, it’s worse. The moaners are even more miserable!

But not my eldest son!  To him, January 2nd means – and always has – that “Spring is almost here!” He refuses to accept anything else. He calls attention to the slightest ray of sunshine; the tiniest difference in the time darkness occurs in the evening, and he gets very excited if the temperature rises even one degree. He plants seeds in flower pots and puts them in the windows of his basement, watching diligently for any sign of life to appear.

In every phone conversation we have, he says, “Have you noticed that the days are getting longer?” I always say, “Yes,” whether I have or not. I wouldn’t want to burst his bubble. Agreeing is a little difficult for us since he lives for spring and summer and I come alive in fall and winter. We try to humor each other;  I, going along with his “longer days” theory, and he, telling me winter is not so bad when he actually hates it passionately.

I’m aware that I’m in the minority. I accept that. So I promise I’ll try to play nicely and write pretty little stories about spring (if it ever arrives), and I’ll even try to come up with something good to say about hot, sticky, humid, buggy, steamy, dirty, oppressive summertime... but those of you who know me well won't be fooled. You'll know it’s all a facade.

You'll know. I won’t really come alive until I sense the nearness of magnificent October once again!

We all know your time is Oct. peg. You have a long time to wait. Hope you like spring and summer just a little.

hey peg.. nice post as usual. I'm happy to move on to the next month. Maybe we'll see some sun. sam

This is good. I love the way you write about the seasons. keep it up.