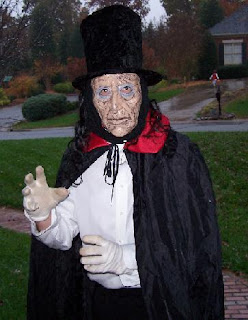 Halloween is an annual holiday observed on October 31, primarily in the United States, Canada, Ireland, and the United Kingdom. Common Halloween activities include trick-or-treating, wearing costumes and attending costume parties, carving jack-o'-lanterns, ghost tours, bonfires, apple bobbing, visiting haunted attractions, committing pranks, telling ghost stories, and watching horror films. I find it odd that this day is listed as the second most popular holiday in the United States, next to Christmas.

In the small town where I live, little goblins will start ringing doorbells at six o’clock this evening yelling,“Trick or Treat!” I’m probably the only person in the world who dislikes this tradition. I’ve never liked Halloween. Even as a child, I thought it was a bore and just not worth my time. Why should I use up all that energy dressing up like a witch or ghost or whatever and go from door to door ringing doorbells just to get a bag of candy when I had candy any time I wanted it. I’ll admit I was a strange child; most of the time, I preferred mashed potatoes over candy anyway.

I probably would have ignored the day altogether, but when my friends started asking me to go trick-or-treating with them, I’d oblige just so I wouldn’t appear “different.” While others wore bought costumes representing Frankenstein or Dracula for the boys and beautiful fairy princesses or ballerinas for the girls, I’d go into my mother’s closet and don one of her outfits, a pair of high heels, apply some makeup and be on my way. It really didn’t matter to me – just as long as I looked like someone besides me.

I remember once, I didn’t have much time to get ready because my friends were waiting so I grabbed an old purple hat from my mother’s closet shelf, pulled it down around my face and applied lots of bright red lipstick. That’s all I did, but for some reason, it was a hit. Everyone howled!

When my own kids began to learn about Halloween, I pretended to enjoy it. I’d buy whatever costume they wanted or help them make one of their choosing. They had to dress up at school on the afternoon of Halloween and parade around the neighborhood. Prizes were given for the best costume. It was a big deal to them, but I still wasn’t impressed and was always glad when it was over.

Rita Rudner summed it up for me with this quote:  Halloween was confusing. All my life my parents said, "Never take candy from strangers." And then they dressed me up and said, "Go beg for it." I didn’t know what to do! I’d knock on people’s doors and go, "Trick or treat." "No thank you."

This is cute peggy. Can't believe you don't like Halloween. its so much fun.

The person in the picture should be in the movies. Great costume and an amazing actor.
Oh, I enjoyed the story as well.

Thanks Anonymous. I agree with you. This guy... or gal... is fantastic!
Peg~