They Can't Do This To Me 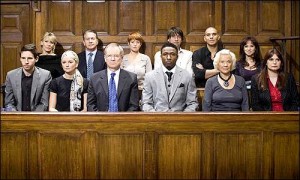 My daughter was complaining today because she had been summoned for jury duty. Oh my, was she hot under the collar! “They can’t force me to leave my job and my kids and go sit on jury duty for who knows how long for a fraction of the money I earn at my job,” she said. “Why my kids and I would starve!”

We couldn’t help but laugh at her animated fury. She said, “It’s not funny. I won't go; they can't do this to me!"

Oh, but they can. The United States Constitution guarantees the right to a trial by jury in both criminal and civil cases. Each citizen’s participation as a juror helps make that possible.  Furthermore, failure to appear carries dire consequences.

Any person summoned for jury service who fails to appear as directed shall be ordered by the Court to appear and show cause for his or her failure to comply with the summons. Any person who fails to show good cause for non-compliance with the jury summons may be fined $1,000.00, imprisoned for not more than 3 days, ordered to perform community service, or any combination thereof.

Both my husband and I have been called for duty.  My husband was promptly dismissed when he showed up the first day and told them he was his family’s sole money-maker, operating a small business which couldn’t run without his being there.

I served for about ten days, but when back problems occurred, making pain medication necessary, my doctor gave me an excuse that was accepted without dispute.

One of our sons served, too. Some say it’s a privilege. Perhaps it is – in a patriotic sense, but it is indisputable that it’s an inconvenience for young parents - especially single mothers, and poses a financial hardship in today’s economy. The small daily compensation doesn’t come close to what most people need to make a living these days.

Perhaps summoning some of the retired population would be helpful. Many in that category would probably look forward to having a reason to get up each morning. And the small amount of money may even be helpful to some. Surely there is a way to alleviate this hardship for those of the younger working class.

I wonder... will my daughter change her mind about showing up for jury duty, or will I be visiting her in jail?

I hope your daughter changes her mind Peggy. It wouldn't be to bad. she might even like it.