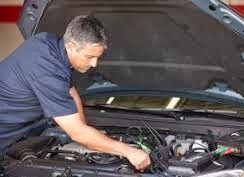 Some days it just doesn’t pay to get outta bed! Yesterday was one of those days for me.
I had the day all planned; I was going to do everything constructive: clean out the fridge (yuck!), do laundry, pay some bills, catch up on mail, and cook a nice dinner.
But... I had so many interruptions that the only thing on the list that I accomplished was the dinner, and I did that holding the phone between my ear and shoulder while talking to a friend. I didn’t want to appear rude by saying, “I’m having a busy day.” So I cooked and continued talking at the same time, ending up with a stiff neck and a headache.
While I was multitasking, Mr. H. came in and said, “I’m going to take your car and fill it up with gas.” I nodded. Pumping gas is one of those things I  don’t do – right along with cutting grass and emptying garbage! Call me old fashioned, but I think there are still a few things that only a man should do. Now, I understand that someday, I could find myself alone with no alternative but to do these things myself, but, until then – I’ve got Mr. H. so excuse me while I milk it for all it’s worth!

One of our neighbors always cuts grass while her husband relaxes in front of the TV. She has three small children, does all the housework, cooking, laundry, grocery shopping, and taxies the children to and from their activities. I often wonder what he does. He doesn’t seem to be debilitated unless it’s something you can’t see, like a bad heart.
I often tell the woman that she’s messing things up for the rest of us who don’t want to cut grass. She just smiles and says, “It’s good exercise.”
She’s right, it is. But I’ll get mine in a more enjoyable way, thank you! Like going to the gym where I can watch body builders with big muscles sweat while they work out!  (Just joking, Mr.H.)
I digress.
And so... Mr. H. leaves to take my car for gas. In a few minutes, he comes back in and says, “Your car won’t start. Battery’s dead!”
“Oh, great!” I say, my mind wandering back to the last time this happened: I had left an inside light on – for about a week. I’m in trouble if I did it again, I realize.
He changes into work clothes (this is serious!) and goes back out. His truck is in the driveway, right in front of the car, which is in the garage. There is no way he can jumper from his battery to mine. So he removes the truck battery, takes it into the garage, puts jumper cables from it to my battery and Voila! it starts. However, when he takes the cables loose, it stops again. Bad battery!
He realizes that the only thing to do is put his back in the truck and go buy a new battery for my car, but when he puts it back, guess what? The truck won’t start either! So now... we have two vehicles with dead batteries! What were the odds of that happening?
I panic!
Don’t like the feeling of not having transportation in case of an emergency. Our family is known for its emergencies.
What to do?

Aha! Son #2 lives only five minutes away. Mr. H. phones him. No answer. No callback. Hmmmm...
Thirty minutes later, Mr. H. calls his number again. He still doesn’t answer. After about an hour, he phones and says he went out for a while and forgot to take his cell phone. It’s still 45 minutes until the auto parts store closes, so he hurries over with his cables and saves the day by starting the truck.
Off goes Mr. H. and returns with my new battery. I don’t have to worry about emergencies after all. At least, not tonight.
***
My life often reminds me of a soap opera—especially the part where the announcer says, “Sorry for the delay; we’re experiencing some technical difficulties.”

www.amazon.com/author/peggytoneyhorton
Posted by Peggy~ at 6:59 PM

Funny Peggy! I think we all have days like that but most of us can't write about them as well as you do.

This is great Peggy. You are so good with description. I always feel like I am in your stories. right there with you.

So cute. and so real. This sounds like something that would happen to me.

Love this, Peggy! Is that your son? Very handsome!

Good one Peggy, we all have those days, and nights also, I messed up my TV last night, by using the old remote to change channels, first no picture or sound so call comcast we work together and got the picture back on but no sound, by this time it is 1:00am and I am getting frustrated, so a tech is coming to day.

Good luck with that, Drema!