I'm repeating Poor Old Clyde at the request of some friends who missed it last time. 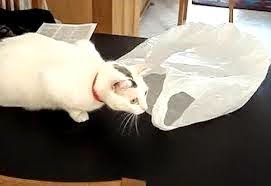 My son, Mark, has a friend, John, who swears that his cat regularly tries to commit suicide. When he told Mark about it the first time, Mark laughed and said, “Oh, you must be joking. Cats don’t commit suicide.” But John insisted that when he goes home in the evening, he can tell Clyde has tried to kill himself because he finds plastic bags everywhere, and, only the evening before, he'd opened the door just in time to see Clyde trying to put one over his head.

“I stopped him in the nick of time,” he said.

When Mark laughed aloud, John became quite indignant, “Don’t laugh!” he said. “This is serious! You don’t know what it’s like living with a suicidal cat! I never know what I’ll find when I go home in the evening.”
Mark shared this story with us, his family, and we all had a good laugh at the very thought of a feline named Clyde trying to commit suicide.

It went on for a while with John telling Mark fairly often that Clyde was still trying to do himself in and he was afraid of what he’d see every day when he opened the door to his house. He hid all the plastic bags but feared that poor old Clyde was so depressed he’d find another way.  And he finally did!
Yesterday, when Mark got to work, John met him with a glum look on his face and said, “You won’t believe it! Clyde is at it again.”
Mark – ready for anything – said “What happened, John?”
Rolling his eyes, John said, “He climbed on the kitchen counter and tried to hang himself with the toaster cord.”
“Oh, John, that’s ridiculous!” said Mark. “He couldn’t do that by himself.”
“I’m not kidding, Mark!” John declared. “The cord was dangling all the way to the floor. I know old Clyde tried to hang himself with it, but thank goodness, he didn’t succeed!”
Finally realizing he’d never convince John otherwise, Mark decided to go along, “I’m happy Clyde is okay,” he said. “Maybe he won’t try it again.”

“Oh, I’m sure he will," John insisted. "That cat's just not right in the head.
Never has been!”
www.amazon.com/author/peggytoneyhorton
Posted by Peggy~ at 6:25 PM

This is sooooo funny Peggy! I can't stop laughing.