Only One Life To Live 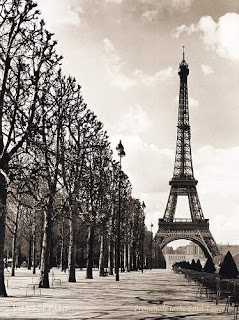 Years ago, my eldest son and I went to Paris, France together. We had many memorable experiences that I hadn’t thought about for a while – until recently. My granddaughter is going to Europe in a few weeks and is very excited. The two of us have been discussing the things she's likely to see and do and it's brought back a lot of wonderful memories.
I’ve always said if I believed in reincarnation, I’d be certain I spent my first life in Paris because, since I was a child, it was always my dream to go there. When it became a reality and I stepped off the plane at Orly Airport, I immediately felt “at home.”

My son had been to Paris before. When he was in high school, he went on a six-week tour of Europe with the Foreign Study League. He was only sixteen years old. As his mother, it was difficult for me to let him go that far from home for that long, but it was such a grand opportunity for him that I didn’t feel I could deprive him of it either. So, I bit the bullet and watched him fly away from Kanawha Airport, knowing I wouldn’t see him again for six long weeks. Hot tears spilled over and ran down my face as I watched the plane leave the ground and disappear from sight.

But two years later, I was on the plane with him as we waved good-bye to the rest of the family and took off for New York where we’d board a 747 Jet to make the flight across the Atlantic. It was exciting and scary at the same time, as I really didn’t like flying, especially that far. And over water.

But I have never regretted it. I have talked incessantly about it, written about it and dreamed about it many times throughout the years since I actually lived it. It was one of the highlights of my life! I’m so grateful for the experience.

It’s funny how history repeats. My daughter is worried about her daughter going that far for that long – just as I was worried about her brother so many years ago. And her concerns are rubbing off on her daughter, who recently told me she’s nervous about the flight. I assured her that this is an opportunity of a lifetime and she will never regret it. She will tell her children and grandchildren about it, perhaps write about it, as I have, and Heaven only knows how many times she’ll relive the things she does and sees on the trip!

We must never allow fear to keep us from enjoying all the wonderful things life offers. No matter what you’ve been told, we have only one life to live.

Live it to the fullest!

peg, you've done it again... surprised us with the things youve done. this is interesting. I like it. sam

Nice post peggy. Maybe there is such a thing as reincarnation. who knows...

Sorry. You'd never convince me, Anonymous! "It is appointed unto men once to die, but after this the judgment." Read it for yourself: Heb.9:27

So true! And the perfect metaphor for life - whether it be fear of flying across the ocean..or just crossing the street. You'll never regret it!