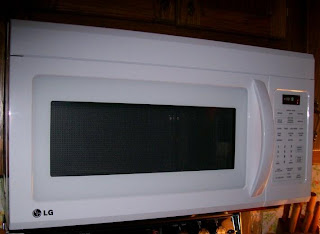 Guess what?  My new microwave was delivered today. The third one! It’s installed. It works! It doesn’t arc. It’s white! And it only took us three and a half weeks to get here.

The installation process wasn’t so bad this time. I suppose after doing it twice within two weeks, it had to be a little easier the third time. I was able to help my husband lift the old one off the wall and into the box that the new one had been in; then I helped get the new one within inches of the wall bracket. He had placed his paint buckets on either side of the range opening as he had done the first time we undertook this near-impossible job. The same long board spanned the opening and rested on the paint buckets. And now, the new microwave was teetering on the board while he pondered the situation.

That’s when he decided it was time to call in a stronger helper. After all, lifting, tilting and positioning the large, heavy appliance perfectly on the bracket was the most important part and we couldn’t afford to mess up when we were in the home stretch. Didn’t hurt my feelings a bit to be replaced. I was never cut out to be a heavy lifter and was happy to move out of the way and let stronger muscle take over.

My son was here in a few minutes and the two of them had it on the wall bracket in a flash. In no time, I was brewing tea in my new microwave.

I never dreamed, when my microwave quit on me, that it would take almost a month to find a new one and get it installed. Sometimes I think these things happen to test our patience. If that’s the case, I passed this test with flying colors. I was actually getting used to not having one. I only opened the door from habit about a dozen times – then I’d laugh and turn on my range oven instead. I'm rather proud of my patience and adaptability. I wonder how many other conveniences there are in my home that I could do without? Probably several.

Just don’t ever try to take away my laptop!

Great peg. I'm so happy yiou finally got one. I wouldn't want to do without mine that long.

That's so nice. you helping your husband like that. you must be pretty strong.

Looks like a nice one too. I'm happy you finally got it. you really were patient.

How nice peg. no more microwave worries. bet your husband is glad it's over for him to. sam

LG is a good one too. I have an LG washer and will never have another brand. congratulations on the finished job.