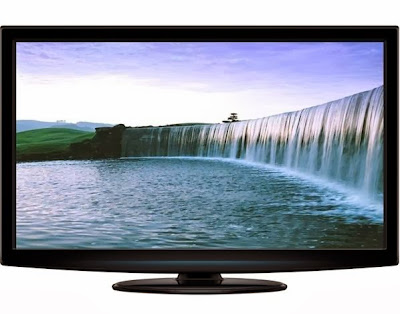 I might be the last hold-out on buying a flat screen TV. I don’t care about TV anyway. Rarely watch it. As long as I have music during my every waking hour, I don’t see the need for anything else.


But when the picture on our TV slowly began to do strange things, letting us know it was not long for this world, Mr. H. said, “We’ll have to get a new one soon.”
“Um-hmm. But not yet,” I said.
One reason I was against it was that there had to be many changes made to accommodate a flat screen TV. We had an entertainment center with shelves for CDs and videos and lots of storage for other things – and it was full – but the shelf designed for the TV was only large enough to hold our 15 year old 27” TV.
We’d not only have to buy the new TV, but also something to set it on, and that meant getting rid of the entertainment center we had, which was a beautiful cabinet!
I hate change! And that was way too much of it for me!
Months went by and each day, the picture was a little worse, but I ignored it and kept listening to music. When our family visited, they complained about the bad picture, and I said, “I suppose we’ll be getting a new TV before long.”
But not too soon, I told myself.
And then, one day, the picture became intermittent – still watchable if you didn’t mind losing a scene here and there. Not long after, the picture started wriggling and slithering all over the screen like brightly colored mercury and it was impossible to watch.
Mr. H. said, “It’s time to go shopping.”
From store to store we went, not finding exactly what I wanted, so we came home empty-handed. But Mr. H. meant business. He went straight to the Internet and searched until he found the TV he liked at a price he liked even better and ordered it. It would be here in two days.
Hmmm, now I had to settle on a cabinet to put it on – hopefully one with lots of storage.
So, following Mr. H’s lead, I went to the Internet. After looking at dozens of cabinets, I was confused and gave up. They were either too large or too small, the color was too light or too dark, or I just didn’t like them. Besides, I didn’t want to do this! It was as if ignoring the problem would make it go away, but down deep in my soul I knew I had to face it squarely and get ‘er done!
Ding! went my computer. Checking my e-mail, I found one from Mr. H. with a picture on it. “Does this one do anything for you?” he’d written.
It was a pretty cabinet. I liked it okay. I wrote back: “Do you like it?”
He answered, “Yes.”
After reading the particulars and looking at it a while longer, I wrote back: “It’s unusual for us to agree on something, so it must be a sign that this is the one. Go ahead and order it.”
I’m sure Mr. H. was relieved when he’d finally managed to round up the two new pieces we needed, but there was still much work to be done.

Peggy I just got a flat screen about 3 weeks ago. Nothing was even wrong with my old one except we still had to use the "box" with it because we don't have cable. I barely watch t.v. so I really was the last hold out too. We had to find one that could still be the same height as the old one because I have a carving from my youth that hangs right above it so I wasn't moving that. Everyone is so happy that our new t.v. makes the room look sooo much more updated. Ha Ha who cares? Not me.

I absolutely LOVE reading your stories ..... they always make me smile!!! Love you, my friend!