The First Day Of School 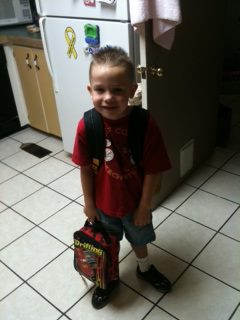 This evening, for no apparent reason, my mind drifted way back in time to the day I took my eldest child to school for his first day. He had been a rather clingy child, always hugging me and saying, “I love you, Mum.” I was pretty sure that leaving me for several hours a day was going to be hard on him. He also enjoyed playing with his younger brother and sisters. I knew he’d miss them. And they, him.
But first grade beckoned – like it or not – and nothing could change that. In those days, kindergarten was optional, and I certainly had no desire to push my children out of the nest any sooner than absolutely necessary; so all five of them waited until first grade to enter school. It didn’t hurt them either. All were good students throughout school. We were proud of them!
And so... we were up early on that September morning, Lee and I. He didn’t seem nervous, which was more than I could say for myself. He had breakfast and got dressed in new clothes and shoes that had been purchased just for that day. I took pictures, of course, and off we went, Lee waving goodbye to his siblings who were lined up on the front porch to see him off. My mother stayed with them, so they had fun, too.
I parked close to the school, then got out and opened the door for Lee. Smiling and perky, he jumped out appearing eager to begin his new life as a student. But I was certain it was a façade. He’d cry when it was time for me to leave him. I just knew he would!
We had done the paper work earlier, so now we just had to find the room to which Lee had been assigned. Inside, the teacher welcomed us and told Lee where to sit. I was to stand with the other mothers around the outer walls of the room while she made a nice little speech about what the children would be doing that day, talked about the lunch schedule and other tidbits of information. Lee was on the opposite side of the room from me and I was still watching for tears to form or some sign of fear or reluctance to stay in this unfamiliar place. But none of that occurred.
Finally, the nice teacher said, “All right mothers. You may go now. You may pick up your child promptly at three o’clock." I looked at Lee, still expecting tears, a fearful expression, something... but what I saw instead was a big bright smile and a little hand waving goodbye.
Of course I was pleased that he was so happy; glad he didn’t cry or beg to leave with me. As I walked to the car, I told myself that this meant I had done something right. He was ready to go to school. Well adjusted. And that was a good thing.
I got in the car, started it, pulled out into traffic...
... and boohooed all the way home!

Great story peg. Seems your son going to school hurt you worse than it did him. Cute!

This is so cute peg. I can identify. sometimes we don't realize our kids can do without us. we want them to need us forever. Joann

nice peg. I bet Lee really was well adjusted thanks to the good job you did with him. sam

I understand your tears. Been there myself peg. cute post. luella

Another "WOW!" from you, Peggy.

Thanks everyone! I appreciate your comments.