My daughter, Toney, and I used to go to a nearby gym and work out three times a week. We had a great time on those days. Life was good. But, as everyone knows, when it’s too good, something is bound to happen. I think it’s a law!
One fall day, after we’d done our workout and were on our way home, she said, “Let’s stop for yogurt.” There was this doughnut place on the way home that had frozen yogurt in many flavors. Assuring each other that a cup of it would not diminish the effects of the workout we’d just done, we stopped.
We got our yogurt and sat in a booth. It didn’t take long to learn that my daughter had another reason for this stop. She had something to tell me that she feared would cause a bad reaction and she wanted to be in a public place rather than at home – just the two of us. Smart girl!
“Mike has been transferred to Michigan,” she said. She and Mike had been dating for several months. We liked him fine, but I wasn’t ready for her next announcement.
“He asked me to marry him and go with him,” she managed to get out in a meek little voice.
Feeling like my world had just crashed, I said, “What did you say?”
“I told him to give me a few days to think about it. I don’t want to leave my family and go that far away to a strange place where I don’t know anyone, but I’m not ready to give Mike up either.” She looked like she was going to cry – and I felt sick!
This was my eldest daughter. We were close. Very close. She had never been away from home except for short visits with friends. I hated the thought of her living that far away, but knew I had to let go no matter how much it hurt.
Mike had to leave for his new job the first week in January, so we had a beautiful, small church wedding on New Year’s Eve. The guests were family and very close friends.
It was a cold, gray day when the young couple packed up the car and started out on the eight hour drive to Flint, Michigan, a long way from West Virginia! I fixed a nice lunch for everyone and, when it was time to go, the family walked to the car with them. Her younger sister, Tish, was as heart-broken as I was watching her sister leave. The two of them hugged right before Toney got into the car, and it was a touching sight. Embracing each other for several seconds, their bodies quivered as they struggled to hold back tears.
When the car carrying my beloved daughter pulled out of the driveway, taking a piece of my heart with it, we waved until it was out of sight, and then went inside. There are no words to describe what I felt. If I had been a child, I would have sat in the corner, sucked my thumb, held my blanket and twirled my hair!
They left on Saturday and by Monday morning, I was missing her terribly. As I sat by the window staring at the dreary January day – watching the snow fall and wiping tears from my eyes, the phone rang. It was her!  How good it was to hear her sweet voice!  I could tell she was shedding a few tears, too. She tried to be cheerful, but it was impossible to hide her homesickness from me, the mother who knew her so well.
That was almost twenty-three years ago. Toney and Mike are still married. They have a son and a daughter. They never got transferred back to West Virginia, but they’re only four to five hours away now. They come home for special holidays and we visit them occasionally. It’s not so bad. One gets used to changes, I suppose.
But still, sometimes I daydream about the many good times we had together when she lived close.
That's a mother’s prerogative. 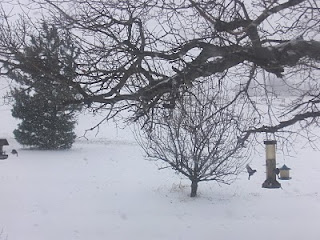 Heartbreaking story peg. Been there. It hurts to have your children leave home... really leave and go far away. Jean

Nice peg. I feel your pain. I'm a mother too. Patricia

Nobody understands what you felt except another mother. Good story peggy.

Let me pitch in for the fathers. I watched my daughter leave for Iraq, and we men can understand what you suffer. One day they will see their own children leave, and the beat goes on.

That must have been really tough, Hugh! Thanks for speaking up for fathers.