I Used Everything You Gave Me 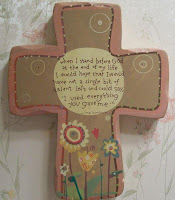 I see from the old clock on the wall that, in less than an hour, I’ll be a year older. Birthdays seem to come around faster every year, don’t they? It can’t have been a year since my last one!

If it were really important to me, I would tell you that I was born at 11:40 p.m. which means I won’t really be a year older for another whole 24 hours. But what does it matter? As they say, it’s not the number of years you live, but what you do with them that is important.

I have this little wooden cross on my bathroom wall. These words are painted on it: When I stand before God at the end of my life, I would hope that I would not have a single bit of talent left, and could say, "I used everything you gave me."  ~Erma Bombeck

I love this sentiment! The woman responsible for it had one of the longest running columns in newspaper history. During the course of her career, she published more than four thousand syndicated columns in 900 papers nationwide, wrote 15 best-selling books, and became one of the world's most beloved humor columnists. She died at 69, her life cut short by kidney disease, but she certainly made the most of the time she had!

With that in mind, I’m feeling very grateful for another birthday. Perhaps that means I’m granted more time to use everything God gave me!

I love this. You write so well.

Erma Bombeck was a wonderful woman. she made a lot of people happy. you do to peg. good post. sam