Citizen of the Month 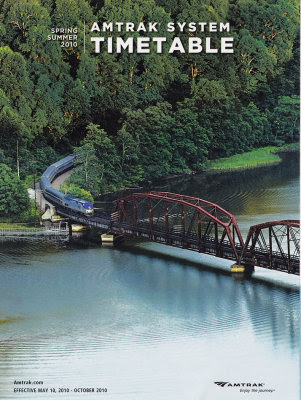 Our grandson had the most wonderful honor bestowed upon him last week.  We are so proud of him! I must share the story with you.

Here’s what the newspaper article by Ben Calwell of the Charleston Newspapers, said:

“The sun was low in the sky on a June evening in 2009 when Chase Gunnoe stood with his camera at the Hawk’s Nest overlook off U.S. 60 in Fayette County. In the distance, he heard the Cardinal, an Amtrak train, as it neared a trestle spanning the New River. As the Cardinal began to snake across the bridge, Chase tripped the shutter on his tripod-mounted Canon 7D digital single lens reflex camera and captured the scene.”

Chase, 14 at the time, posted his photo on a website dedicated to train photography. In a few days, Amtrak’s ad agency spotted Chase’s train shot and sought permission to use it.

After a contract was worked out, Amtrak chose Chase’s photograph for the cover of the 2010 “National Timetable” publication, which is distributed to train stations and travel agents across the country. The timetable is also published on a CD and distributed worldwide. This is the first time West Virginia has been on the cover of the magazine.

Additionally, Chase’s photograph appeared inside the magazine, “Amtrak America” 2010-2011. It has also appeared on the cover of the September 2010 Improvement Plan for Amtrak’s Cardinal.

Nitro’s Mayor Casto named Chase Citizen of the Month for March and plans to put his train photo on the front of the city’s calendar next year. Chase presented a framed copy of his photo to Casto, which he plans to hang in his office.

Chase was honored further on Friday March 4, when he was recognized at the WV State Capitol by the state’s legislature. A copy of the Amtrak photo was given to Governor Tomlin, the Speaker of the House, and each member of the House of Delegates.

You can see more of Chase’s train photos at:

Nice photo peg. Good story about your grandson to. Hope he continues to do well with his picture taking. sam

This is wonderful, peg! Your grandson has real talent. It must run in the family. Julie

How nice. He must be a very good photographer. It's a beautiful picture. Congratulations to him and your family on the honors.

What a delight it is to see Chase's photo. Many times I took the train through southern WV to Virginia and saw some of those beautiful views from the coach windows. I'll treasure the memories of those incredible landscapes forever. And, now, with the wonderful picture that Chase captured, I'm enjoying another wonderful WV train scene.

Thanks to all of you for the nice comments. I know what you mean SVM by remembering the beautiful WV landscapes forever. So will I!