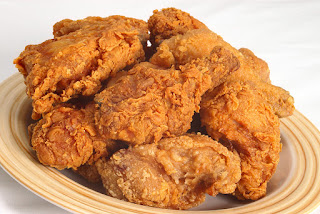 A good friend, whose job takes him to the far corners of the state, recently got a taste of a well-known West Virginia attribute – southern hospitality – when he went to check on a client. If anyone out there has any doubt about our state possessing that quality, this should dispel it.
Lucas pulled up in front of the modest frame home, put his car in park and got out. “This must be where Jesse lives,” he said aloud, though there was no one around to hear him.
Walking up to the gate, he opened it and strode toward the front porch. He knocked on the door and an older looking woman opened it, smiling.
“Hi,” he said and before he could state his business, the woman flung open the screen door and said, “C’mon in. I’ve got a big batch of fried chicken and a pitcher of sweet tea. Would you like something to eat?”
Lucas couldn’t help but stare at the woman. She was the spittin’ image of his Great-Aunt Martha, a matronly looking woman he remembered from his childhood. Aunt Martha insisted that everyone who entered her house have something to eat and drink. Food was always cooking and there was plenty for whoever showed up at any given time. Her look-alike wore a blue-flowered cotton housedress covered with a full bib-apron; her gray hair was pulled back in a bun, and on her feet were unattractive brown oxfords.
“No thank you,” he said. “I’m not hungry. I just came to see Jesse.”
“Oh, honey,” the woman said, “Jesse doesn’t live here.”
Looking at the small piece of paper in his hand, Lucas said, “This is the address I was given. I was told he lived here.”
“Well, you see,” said the woman, “we’re all related here in the holler and sometimes people get mixed up. Come over here to this window and I’ll show you where Jesse lives.”
Lucas went over to where she stood at the window. She pointed and said, “You see that house way over there to the left with the purple roof?”
“Yeah,” said Lucas.
“That’s Jesse’s house. He’s probably home. He never goes anywhere.”
“Yes, ma’am, I’m sure he’s expecting me. I’d better go on over there then. Thank you for your help.”
“You sure you won’t eat before you go?” the woman said.
“Yes ma’am, I’m sure, but thank you for offering.”
As Lucas turned his car around, waved at the woman standing on the porch and drove toward the house with the purple roof, he thought, Gee, that fried chicken sure smelled good!

When he knocked on the door, Jesse opened it, offered his hand to Lucas and said, “Come on in. We’ve been waiting for you.” An attractive dark-haired woman appeared from another room and Jesse said, “This is my wife, Joann.” Smiling, the woman said, “Nice to meet you. We were just about to eat. Would you like some pinto beans and cornbread?”

Hesitating a moment as his mind flashed a picture of his Great-Aunt Martha, Lucas finally said, “That sounds real good, Ma’am. A small helping would be nice.”
www.amazon.com/author/peggytoneyhorton

Nice little story about southern hospitality. it really does exist. Southern people are the nicest in the world. Good post Peg.

Funny that Lucas turned down the fried chicken and ended up with beans and cornbread. Good story.


What a feel good story this is Peggy, I can almost smell that fried chicken and taste the beans and cornbread. Southern hospitality exists in many places. Nothing like it. Good story!

Oh,Peggy, this is great! I think everyone has an Aunt Martha. Sweet memories.