Our Home in the Heavens 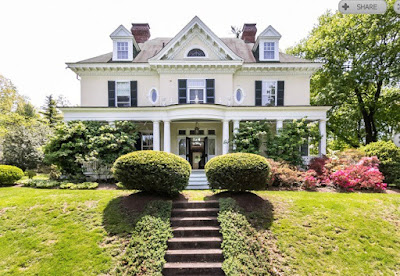 We once lived in a two-story house so high on a hill that you could almost reach up and touch the clouds.
To get there, you had to drive around and around a hillside on a narrow road – nearly meeting yourself coming back in one spot – and when you finally reached flat land, you were in front of our house – except you still had to look up to see it! It sat on top of another hill and had 30 or 40 steps leading to it.
Higher and higher you climbed until you were on the front porch, which was the full width of the house and had a porch swing at one end. I enjoyed many summer evenings swinging on that old squeaky swing with my children.
Inside the house, there was a large living room with a fireplace on one side and a flight of stairs on the other. On the second floor, there were three bedrooms and a large bathroom.
In the master bedroom, on the front of the house, there were three windows, side by side. Looking down from the windows almost made you dizzy. You could see the hillside that you drove ‘round and ‘round on to get all the way up there.
This had to be about as close to Heaven as one can get without dying.
We moved there in midsummer – a spectacular time! With copious blooming flowers and trees, cultivated by the previous owners, surrounding the house, it felt surreal – like another world – and yet, in only five minutes, you could be “off the hill” and back into civilization.
Winters were beautiful, but difficult. It was nearly impossible to drive the hill in the snow and walking it was not much easier. However, when snow covered the abundant foliage and long icicles hung off roof edges, it was a lovely sight to behold and felt even more otherworldly than summer.
The children played on the hillside that was our front yard. Although it was practically a prerequisite to have one leg shorter than the other, they adjusted and had a wonderful time. One saving grace was the concrete patio at the back – right outside the kitchen door. It was the width of the house, giving our daughter, the youngest at the time, plenty of room to ride her tricycle. We bought a six-foot long redwood picnic table where they enjoyed sharing their summer lunches with ants and bees. J
Family picnics were great there, too!
Our two sons started school during our time on the hill. Oh, how I worried when they left in the mornings to walk down the many steps that took them off the almost vertical hillside and then, several blocks to the school they attended. Fortunately, our next door neighbors had a daughter, a few years older, who agreed to look after them both going and coming. In those days – people helped each other without expecting anything in return.  J
That trudge to school – even in wintertime – is still a good memory for both sons.
After four short years, we were forced to move when we learned our family was growing but our house, which had exactly enough room, was not.
Moving day was sad. None of us wanted to leave our home in the heavens. But God always provides a pleasant memory to ease the pain of a bad experience.
Unbeknownst to us, our youngest son sneaked a kitten into the moving van just before its doors were closed. Hours later, when we unloaded and found a hungry black kitty meowing at us – and learned how it got there – we shared a good laugh and Cleo had a good home until she died many years later.
“Beautiful memories are the glue that holds families together.”

What a great story Peggy! I love your descriptions and your writing in general.
Wonderful!!

Beautifully written account of an earlier part of your life. I can feel the emotion. You not only loved that time in your life but you also love reliving it through your writing.