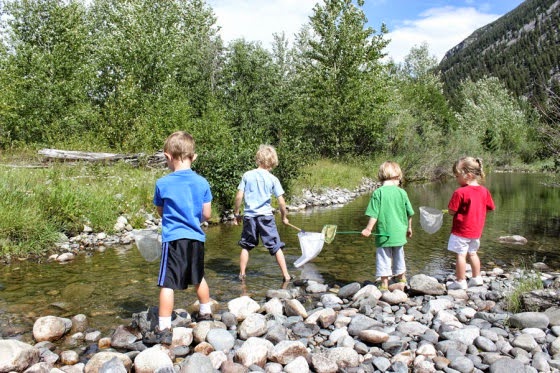 The thermometer reached 80 degrees today.
It was the kind of day that took me back in time – to a wonderful time when my children were young.
If I close my eyes and concentrate, I can still see it.
Summertime.
Most days were about the same.
As soon as they were up, they had breakfast, got dressed and headed outside to meet up with neighborhood friends and play until lunch time. There was never a lack of fun things to do. They rode bikes, hiked up into the woods not far from our house, waded the small creek that ran through our neighborhood and anything else they could invent to entertain themselves. It amused me that my children hated going to school, yet, during summer vacation, “playing school” seemed to be great fun.
Ours was a new subdivision and the building was temporarily halted two houses up the hill from ours. That’s where the woods started. The kids loved going into the cool green forest to explore and, some days, when they sensed it was lunchtime, they came home and asked me to fix lunches so they could have a picnic under the trees. They still talk about those picnics in the woods today – a lifetime later.
Whether they shared their lunches with ants under a large tree in the forest or with the family dog at the kitchen table, afterward, they went back to their play and didn’t come home until dinnertime.
But they were never so far away that they couldn’t tell when it was time to go home for dinner. Whether it was instinct or the fact that fathers began coming home from work, they knew. And home they came.
With dirty faces and hands, grimy clothes, shoes that had to be removed just inside the door, and with ravenous appetites, they came!
After clean-up, everyone was seated for dinner. Our kitchen-dining room combination made it necessary for the children to sit at the kitchen bar and Mr. H. and I at the dining table. This meant that two of the children had their backs turned toward us—a recipe for mischief to be sure.
In his working days, after a long, tiring day, Mr. H. wasn’t one for a lot of foolishness at the dinner table, but for some reason, that’s when some of the kids felt like a little fun and games. The eldest girl, Toney, sat with her back to us and thought it hilarious to make her older brothers laugh while pretending to be innocent of any part in it herself. Once or twice was okay, but after several times, Mr. H. would tell the boys, in no uncertain terms, “Stop the foolishness and eat your dinner!”
That only fanned the flame of fun that had already begun to burn. Toney made funny faces until the other children almost choked struggling not to laugh. To pay her back, her brother, Kevin, sometimes rolled bread into little balls and dropped them into her kool-aid or milk. This caused such a stir that everyone got in trouble and, since none of them would say who did what, they all got punished by being told that no one was to speak another word until dinner was over under threat of not getting to go back outside if they did.
This was extremely difficult, even for me. I could see them straining not to laugh and would talk aimlessly to divert their dad's attention.
Thank goodness, Mr. H. always left the table first, eager to settle down in his recliner and smoke his pipe. The kids dawdled over whatever they didn’t want, spreading it thin over their plates until I’d finally say, “Great, you cleaned it all up!” and excuse them from the table. I can’t count the number of times I found a ring of peas under the edge of my daughter’s plate when I picked it up, and pretended not to notice.
Dinner over, it was off, once more, to find their friends. 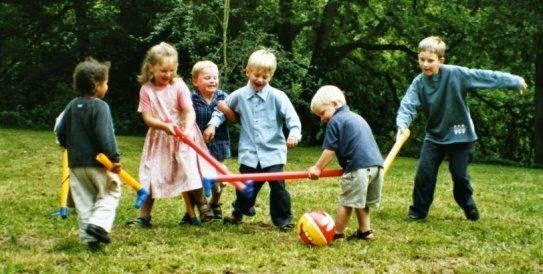 ﻿
Our neighborhood was loaded with kids who gathered in the evenings and played outside games for hours. But when it was almost dark and porch lights began to dot the neighborhood, signaling them that it was time to go home, they exchanged “good-byes” and “see ya’ tomorrows” and trudged toward their homes.
After hot, sudsy baths, sometimes our little urchins had a snack or played a board game before bed, but more often, they were tired, happy kids ready for a night of battery recharging before waking to another busy day.


It was so easy keeping kids happy in those days – even without i-pads, i-phones, or computers. Looking back, it’s hard to believe how contented children were who had less to entertain them. They had to entertain themselves. What a unique concept! And they managed it beautifully.
It was an amazing time! I’d like to go back there for a visit.
I believe I just did!

Very nice Peggy! Love the way you write. Your descriptions are the best.

What a wonderful story! I was telling someone earlier this week how I would love to go back in time to when I was a kid....and this story reminded me of all the great reasons why! Thanks, Peggy!! (I can't imagine Toney getting the others into trouble like that....)

Lee has told me about the Toney and Kevin dinner stories. I enjoyed "mom's point of view".

Those were precious days, something that our grandchildren aren't going to experience, it is a chore just to get them outside because they have to many gadgets to use, computers, X-Box, I pads, kindles they need to experience wading in creeks, climbing hills, playing in mud and fishing. Thank you for helping me remember some of my youth was fun.

I miss those days too. This was a great story to wake up to.

Great story Peg. I think all of us who lived through those times would like to go back for a visit - maybe even stay for a while. Lol.