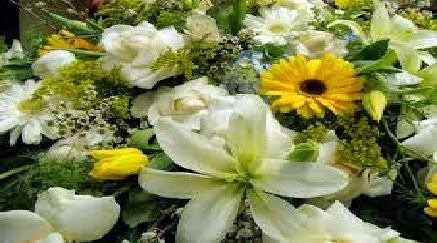 January’s a bleak month. It seems to have no purpose – unless it’s to give us an excuse to do nothing except what is absolutely necessary – to rest up from the exhausting holidays.
Intermittent sunshine makes today tolerable, but yesterday was so dreary, I wanted to pull the covers over my head and not peek out again until I saw sunshine. But I didn’t.
As always, the day passed and another one dawned, bringing with it – for me – memories of another bleak January day.
Many years ago, on this date, my father died. It was a Saturday. A day much like today: Cold, with a light covering of snow on the ground and a few snow flurries. I remember it as if it were yesterday.
It was also my parents’ 45th wedding anniversary. My dad shopped all day for just the right gift for my mother, but had trouble finding it. He phoned me three times throughout the day to ask my advice about things he was considering. I’ve wished a thousand times I’d gone with him! Perhaps I could have lessened the stress and changed the outcome. Probably not.
But I could have spent one more day with him!
When he returned home, it was almost dark. My mother had a nice dinner ready for them, but he didn’t feel well and told her to keep it warm for a short while so he could rest. She fixed him a glass of tea and as he sipped it, he became sicker and had trouble breathing. She called 9-1-1.
He had been taken out on a gurney several times before, but this time was different. On the front porch, he looked up at the next-door neighbor, who had come over when he heard the ambulance, and said, “I won’t be back this time, Buddy.” I’m told he then smiled and shook the neighbor’s hand for the last time.
My mother phoned me. A son-in-law, who was visiting, took me to her house. She hurried to the car and we rushed to the hospital. We knew it wasn’t good when a nurse led us, the family, to a “private” room to wait. I phoned the rest of my children and they were all there shortly.
Daddy Dan, they called him.
Everyone loved him! Not one would have refused to come and not one eye remained dry when a nurse regretfully told us he was gone and asked if we wanted to see him.
The first words from my mouth were, “I haven’t seen him for two weeks!” At that moment, I felt so ashamed. We lived only 15 minutes apart. How could I have let that much time go by without seeing my parents? We talked on the phone almost every day, but I had children, a husband and was working part-time. Life got in the way of what should have been devotion to my wonderful parents.
Some things hurt forever.
On the day of the funeral, I clearly remember passing huge piles of dirty snow along the sides of the road as the long, black, salt-stained limousine carried our family slowly toward the cemetery. It was quiet inside the car.
It’s odd what the mind retains at stressful times. When we got out of the car at the cemetery, I watched as dozens of beautiful flowers were carried inside by funeral home personnel. I thought, Those can’t be real! Flowers don’t bloom in January, do they?
It was almost like a dream - a depressing scene that will live in my memory forever – only to repeat on dreary January days.
www.amazon.com/author/peggytoneyhorton
Posted by Peggy~ at 4:35 PM

Oh Peggy! This is beautiful but depressing. Your pain comes through in every sentence. Sheer artistry!

I was hurt and thrilled at the same time reading this one Peg, As usual, you did a beautiful job writing it, but I couldn't help but identify with the feelings you portrayed. I felt them when I lost my father too. Great post.

I felt a lot like that when mom passed, it was on my watch when she fell, she was in the bath room and I went to close the front door, when I heard her fall. I should have been there with her, maybe it would not have happened. She passed a few days later. If she had not fallen and broke her pelvic, she may have lived songer. It's something I think about a lot. Love You.

Mother - had just finished putting on my make-up when I saw this post. I remember the day very well, and now need to re-do my make-up. I've never stopped missing " Daddy Dan",,,,,

Bless you for writing! None of us have ever stopped missing him and never will. He made a huge impact on every life he touched! A "special" man for sure!

Thanks Peggy for another great writing.