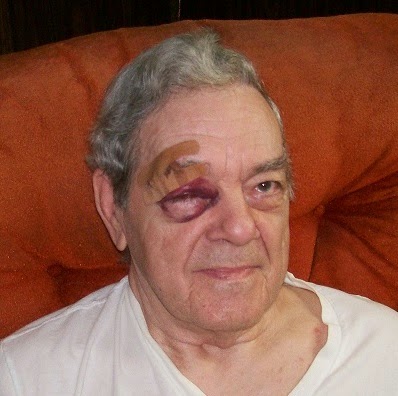 Mr. H. and I had quite an evening and an all-nighter to boot!

We did what everyone hates, but finds themselves having to do occasionally anyway.
We spent the night in the ER!
Here’s what happened:
Around 7:30 in the evening, our son phoned and said his car stopped on him and he was very close to our home, so he wanted his dad to come and help him, if possible.
Well, of course, Mr. H. went and they managed to get the car back to his house by towing it with a chain and Mr. H’s truck. When they got there, it had to be maneuvered into the driveway, so, with son in the car, Mr. H. decided to help by pushing the car, which turned out to be a bad idea. The street was wet, and as the car started going forward, so did Mr. H. and down he went, first, on his hand, shoulder, and knee, and finally his head hit the pavement – hard! He got quite a gash right on his eyebrow!
Son phoned me and said, “Just thought you should know, we got my car home alright, but Dad fell and he’s coming home injured! It looks pretty bad!”
After wiping away the blood, it was easy to see he needed stitches... so off we went to the ER. We thought a few stitches would be easy – just jump over to Thomas Hospital, get the gash stitched up and be home in time to watch the eleven o’clock news!
Nope!
Little did we know that the obligatory time at the ER, no matter what the problem, is at least six hours!
We checked in at the ER at 9:25 and they took us right in – probably because of the amount of blood and the bump on the head. We felt good about this. After he was in a bed, a nurse handed him an ice pack and said they’d have to do a CT scan of the head and spine. After that was done – took about five minutes – we waited and waited and waited. Three hours went by and Mr. H. was threatening to leave without having anything done. And I was freezing to death in that deep freeze they call a hospital!
But finally, at 2:20 a.m., when we’d been there 5 hrs., the dr. came in, cleaned the wound and stitched it up. It only took two stitches, but he said they were “double” stitches, whatever that means. He explained that they’d hold it closed and “He’ll be able to resume his modeling career after it heals.” Cute, but by now, neither of us was in the mood for comedy!
We left the hospital at 3:10 a.m, after being there close to our required six hours. When we got home, his eye purple all around and swollen shut, we unwound, got warm and finally made it to bed at 6:30 a.m.
This afternoon, I sent all our children a picture of their dad’s shiner with the caption, “Don’t mess with Maw-Maw!”
“I love the night! It’s not uncommon for me to see the light of a new day before closing my eyes on the old one.”  ©~peggy toney horton

NOW WHEN YOU TWO LEFT CHURCH YESTERDAY EVERYTHING WAS GOOD, NOW LOOK WHAT YOU HAVE GONE AND DONE. GET A BIG STEAK AND PUT ON THE EYE, THEN GRILL IT TOMORROW FOR DINNER. NO KIDDING NOW HOPE ALL IS OR WILL BE WELL AND THANK GOD HE WASN'T HURT WORSE. TAKE CARE AND PRAYERS FOR BOTH OF YOU.

Peg isn't very big but she sure can pack a punch.

Oh my goodness! Hope he is feeling better today and you both caught up on rest!

Gosh, glad he wasn't hurt worse, but this looks painful !

That's so scarey.....his eye too but how terrible?! I hope he's on the mend soon. You better baby him Peg!

My goodness! Hope he heals up quickly and doesn't have much pain. I understand about the ER. Rus and I spent many times there and it's never quick. Give Mr. H my best.

Oh my, hope he is doing ok.