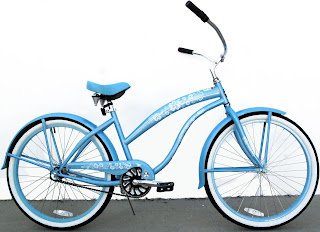 I recently dreamed that a man with a red spot on his face mentioned me in a speech shortly before he died. When I awakened, I was puzzled. But I soon realized that it doesn’t matter whether I know a man with a red spot on his face or not; dreams don’t have to make sense. In fact, they hardly ever do.
Nobody believes dreams are anything except the imagination running wild, or the way the mind releases tensions after falling asleep. There has been dream study for many years, but, to this day, there is no accepted biological explanation to answer the question, "what are dreams?" So, we just laugh as we share them with friends and family – and then they are forgotten.
However some of us, especially children, choose to believe that dreams actually do come true – the good ones at least.
When I was about ten, I had a dream in which I saw myself riding a shiny blue bike. I was smiling and obviously happy. When I awakened, I lay in my bed thinking about the dream with pleasure for a long while, but finally dismissed it and went on with my day. My birthday was only a few days away and I hadn’t asked for anything in particular. I was blessed, as an only child, to have most everything I wanted or needed. But when my father came home from work one evening, he said, “I want you to walk down to Keefer’s with me.” Keefer’s was the only hardware store in the small town where I grew up, and it wasn’t unusual for my dad to take me places with him, so off we went for the three or four block jaunt to Keefer’s.
Once there, my dad led me straight to a section where they had a few bicycles set up. My eyes were drawn immediately to a blue one with the name Mercury on the front of it. I’ll never forget the name because, I mispronounced it... “Oh, look at the pretty, blue McCury!” I said, and my father laughed.
“Try it on for size,” he said. I jumped right on, so excited I could hardly contain myself. “Oh, it’s just right. I love it!” I fairly squealed.
With a most satisfied look, my father paid the cashier and I rode the shiny blue bike home~ as per my dream a few nights before! I’m sure I was the happiest kid in town that day.
Believe it or not, some dreams really do come true!

Yes Virginia there is a Santa Claus. Or yes peggy there is a blue bike. Cute story. and I do believe that dreams come true if you wish hard enough.

Hey peg. Great post! I think we all want to believe in dreams. we wouldn't have much to look forward to would we? Jim

you make us believe they do peg. you can make me believ most anythng. sam

I love this post peggy. very cute!
You write the sweetest stories about your dad. I'm sure he loved you very much. Sandy

Nice story peggy. I remember childhood dreams coming true. Maybe it stops when we grow up because we don't believe as strong.

Yes, Peggy, some dreams really do come true. Yours did. Good story.

What a nice story! Less romantic but I lost my Ipod once and was very upset. Two weeks later I dream the Ipod is in my wardrobe. The next day I check in the wardrobe and there it was!

Thanks for the comment. I'm glad you found your Ipod. I believe dreams do point us in the right direction sometimes.

Aw! I once lost a camera card just before going on holiday then dreamt that I was on holiday, taking photos and fished the spare card out of my washbag when I needed it. Sure enough, the next morning when I checked my already packed luggage I found the spare card in the washbag. Crisis averted! ;)w