She Keeps Changing Her Mind 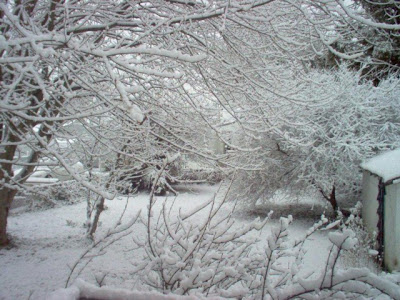 Today was a typical March day.
When I got up this morning, the skies were gray and snow was flying. The flakes were so large and dense that I could barely see across the street. What a beautiful sight! But within minutes, it had stopped and the sun was shining! There’s no doubt March is a woman – the way she keeps changing her mind.
My son was up early and took pictures of the winter wonderland that was his backyard. Knowing my habits, as well as those of March, he was afraid I’d sleep too late and miss the snowy beauty that I love so much; so he very thoughtfully sent me the pictures. I was thrilled when I saw them!
It squalled most of the day – first snow, then sunshine – acting exactly as we've learned to expect March to act.
March is mostly known for its gusty winds, but there are other memorable things as well. In our part of the country, we start seeing all kinds of new growth shooting up out of the earth. If you planted bulbs in November, you’ll probably start to see the fruits of your labor this month. You'll soon see spectacular fields of daffodils - and possibly tulips. They can bloom any time from late March until June, depending on the variety. Many trees are budding. At any rate, we’re seeing enough growth to give us hope that the long winter is behind us and spring is almost here. But don’t be fooled! March is very erratic. One day, it will be spring-like and the next, it may be snowing and feel like winter again.

Today was one of those March days when the sun shines hot and the wind blows cold: when it is summer in the light, and winter in the shade. ~Charles Dickens

Nice description of March- not one of my favorite months. I like June.

pretty picture of the snow.

Your love of the seasons comes through in your writing peggy. It is so beautiful. Keep writing.
Sandy

What a wonderful month. I woke up March 1 realizing that the doctor told me yesterday that my biopsy came out negative! Any month can be a great month!