An Odd Place for Dolls to Live 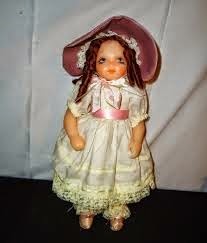 One of my least favorite things to do is visit my Ophthalmologist. I'd rather jog naked in January!


However, there are some things we must do, like it or not, for our own good.
Mr. H. and I bite the bullet and do this thing I dislike so much two or three times a year. We learned by trial and error that it’s easier for us if our appointments are arranged so we can go on the same day. That way, we cut down on the number of trips to Charleston, the gasoline and time consumed.
And so... yesterday was the day. I’d been dreading it more than usual  all week because it was time for me to have a Field Vision Test.

Oh, how I hate the Field Vision Test!


Others tell me they don’t mind it so much, but it’s torture for me! I think I must be overly sensitive to the drops that dilate my eyes because my eyes stay dilated for ten to twelve hours. For all that time, I can’t see without glasses and can’t see with them. It’s a terrible feeling!
But yesterday, after all the waiting and dreading and discomfort, the outcome was good. The doctor said, “It looks like you’re holding your own,” and, “I’ll see you again in five months.” Can ya’ say, “Yay?”
~
And that’s not all. There was one other good thing about this doctor visit.
The scary-eyed dolls were gone!
What? You ask.
Here’s the story:  Until yesterday, when we entered my Ophthalmologist’s office, the first thing we saw, standing there in the reception area, were a dozen or more dolls, most of them about three feet tall. They were dressed in long, elegant dresses reminiscent of the 1800’s and had exquisite hairdos that harkened back to the same era.  Ah, they were lovely indeed!
If you like that sort of thing.
The dolls have been there to greet us each time we’ve gone for more than fifteen years. I have no idea why the doctor displayed them there, and never asked, but thought a doctor’s office an odd place for dolls to live.
I always rushed past them to avoid the cold chills that covered my body when I looked too closely. Yes, as ridiculous as it sounds, I’m afraid of dolls! Especially those with porcelain faces that have big, glassy green or blue eyes that always seem to be staring at you. 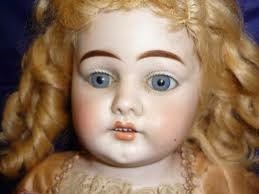 ﻿As a child, I never wanted a doll for Christmas. But sometimes, my mother made sure there was one under the tree anyway, hoping to change my mind. She once said, “Santa thinks all little girls like dolls.” And I said, “Well, Santa doesn’t know me then, ‘cause I hate them!” Mother didn’t like that much and the dolls kept showing up under the Christmas tree even though they gave me nightmares.
I hope the dolls at the doctor’s office are gone for good and not just out for a good cleaning. I’ll be very disappointed if, at the end of January, when I go back, they’re standing there staring at me again – all nice and clean and ready for another fifteen or twenty years of duty greeting people at the door.
But I won’t think about that today. January will be soon enough. Perhaps I’ll ask around and, if I hear that the dolls are back, I may opt for that naked January jog I mentioned earlier instead of keeping my appointment.
I'd probably get fewer cold chills!

Unusual story but I like it Peggy.
You're such a good story teller that you make any experience sound like fun. Keep up the good work.

Peggy you are a joy to behold

So funny! I love this one. You are such a good writer.

Cute, Peggy! They do look scary!

What an amusing story. Well-written.

You crack me up!

Peggy hasn't been to my house--the one with dolls.

But you sent me a picture, remember? That was before I told you dolls scare me. You didn't send anymore. Haha!

Perhaps you were frightened by what someone did with a doll when you were very small - too young to have verbalized it but you still saw something that you understood as a violent act.
I must admit I've felt that way about "Chuckie"-looking dolls ever since I saw a Chuckie movie.

Sounds like a real possibility, Su. I don't remember anything but, as you say, I may have been very young. Guess you understand my phobia since the Chuckie movie bothered you a bit.